This is a walk of contrasts – so different from the coastline of the south and Peel with its hills and cliffs of manx slate, sandstone and limestone. To the north of Peel we encounter miles of sandy beaches and sandy cliffs doing their best to fall into the sea. It is here at Kirk Michael that the remains of the ancient Giant Deer has recently been plucked from the crumbling cliffs and is being examined by the Manx Museum.

I parked in Kirk Michael and walked along the main road with a completely different plan to the walk I actually did. Passing by the church on the left with its signpost to the Bishops’ Graves I turned left on a road towards a camp site. This was a wooded road with a stream running down to the sea – or it would have been if we had had any rain in the last two months. It was bone dry today.

When you reach the coast you are filled a sense of peace as the vista opens up into a massive expanse of sea, sand and uninterrupted cliffs. The tide was in, so I walked cautiously along the foreshore for 3-4 miles to the north, accompanied by the sand martins, seagulls, terns, oystercatchers, shags and cormorants who flew on ahead of me every now and again. I also happened to come across a seal that had been washed up onto the shore.

The cliffs are described as precipitous with danger of falling rocks. There was evidence all along of major slippages and I wouldn’t have cared to stop and stare too long there with the wind blowing as it was.

As I reached the far end, the cliffs  fell away into sand dunes where I stopped for lunch and enjoyed the views. There is a car park here for those who might like to do part of this walk. 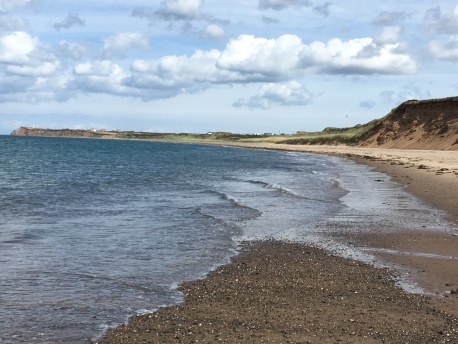 To the north, I could see Jurby church just a stone’s throw away, but I had walked far enough and the rain clouds were gathering, so I decided to start the return route, this time slightly inland, following country roads and the heritage railway track. These were not disappointing as they afforded wonderful views of the local hills and Snaefell even with its unattractive topping of pylons and ugly buildings. It is hard to spoil any view around here.

As I walked along the Orrisdale road, there were sandy fields to left and right, and I wondered in years to come what other mystical creatures might be unearthed from its bowels. The heritage railway track, which in former times went from Ramsey to Peel was very pleasant. There were loads of butterflies but most fluttered by me before I had time to work what they were. The blues were in evidence everywhere. In fact, blue seemed to be the colour as there were little clumps of harebells on the wayside. 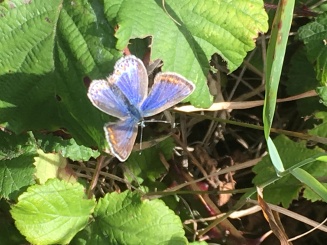 All in all, a gorgeous walk. I shall return to the Cronk car park and continue northwards along the beach another time.

I am having a lot of difficulty uploading photos so I can only show you certain ones. I shall have to investigate….