Today’s walk was 9 miles and 1388 ft of ascent, slightly more than in the advertised programme, but the extra 88ft perhaps mainly accounted for by my scrambling about on the limestone rocks whilst the others had their lunch.

This was a circular walk from Port De Sóller, commencing with a half mile walk along the front before turning off onto a B road and then onto footpath number 221. The paths are clearly marked and wide by our standards, and very well maintained. They mainly comprise either cobbles or limestone interspersed with clay soils, so a little uneven. In rainy conditions these could be treacherous but today it was a fine day with only a spattering of rain every now and again. The path eased us into a gentle ascent providing views towards Sóller. However, it was a persistent ascent for some distance and not being a morning person I would have preferred to have taken this at a slower rate, given that we had a full day for this walk and it was very hot and humid. However, another of our party was equally irritated that we weren’t going faster as he was, as he told me, ‘out for a walk’, as opposed to a walk and a chat which is more common with group walks. Who would be a group leader, trying to keep everyone happy? I sidled along at the back most of the time taking photos and admiring the views. I think we were on the path called Torrent de Son Sales unless that is the name of the stream! We were walking around the Serres de Muleta group of hills. Postscript: torrent does mean river, though as you will see on my other posts, the whole of the island rivers seem to be devoid of water right now. 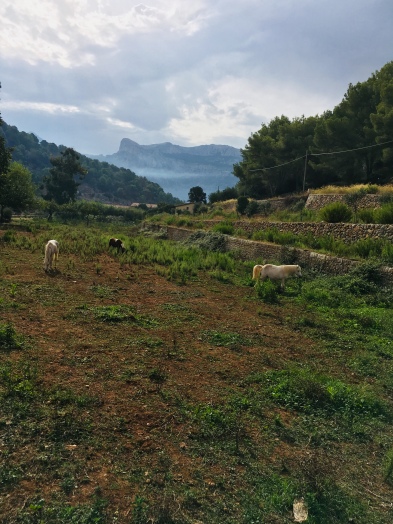 We stopped for elevenses at a cafe/restaurant, that was both scenic and interesting in that it had old machinery, and seating areas on different levels, but as I didn’t want to buy drinks but eat and drink what I had bought with me, I wandered off and found a rock to hide under to eat my pastry. This was the high point between the Sóller valley and the valley to the west with sea views.

When we resumed our walk, it was only for a short distance to take us to a superb vantage point near the coast, and for me this was the highlight of the day at it involved messing about climbing and scrambling over limestone rocks. The others stopped and had their lunch so I could take my time looking at the different types of lichen and being curious about the weathering of the rocks, which are different from the limestone rocks at home. The limestone here is far more jagged and would cut you to pieces if you fell on it. It has little shards of glass-like rock sticking out in places. I found several fossils too. On the map, this is about at the 5 mile marker.

After that we retraced some of our steps to rejoin the inland path, where we were to meet our guide. The olive groves are ancient, gnarled and twisted into different shapes. They have a sculptured look as if some farmer had taken a lifetime pride in developing their contorted shapes. They looked if they could tell a story or two. Some of the olive trees are well over five hundred years old, although it is the 5-10 year old trees that provide the best olive oil.

We met our guide at a junction in the path where a local was selling freshly pressed orange juice. He doesn’t look very happy in my photo though he was doing a nice steady trade. A glass contains 3 large oranges for 3 Euros, and it was worth it. It was delicious and gave me a burst of energy that lasted all the way back.

Our guide told us about how the countryside is protected from the elements, including rock falls, by creating terraces made of limestone walls all the way down the mountain. It also enables them to guide the water in a controlled way as in winter there is more than ample rainfall toppling down these hillsides which would dislodge the soil and create mini landslides. We came across a lime pit – it is a lime kiln, but that would conjure a different image. This is a dug out section of land which is filled with layers of limestone and vegetation and topped with pine, the fuel to burn the lime.  It is repeatedly heated and churned over to produce lime that can be used not only on the fields but also for white washing houses. It acts both as a firebreak and a disinfectant and therefore is often painted onto Mallorca kitchen walls.

A short climb took us to the Refugi de Muleta. According to the Collins English Dictionary, the word ‘muleta’ refers to  the small cape attached to a stick used by the matador during the final stages of a bullfight, so quite why it is called this I don’t know, except this could refer to the shape of the rocks on the top of the hill perhaps.  Beside the hostelry is a lighthouse here called Cap Gros. From here we descended most boringly all the way back to the hotel for almost 2 miles entirely on road. I say ‘we’ but at this point another guest and I independently left the party to walk at our own pace, and I didn’t see him or the party again for the rest of the walk, though I understand they stopped and very sensibly partook of the local beverages on the way home. The views of the bay as you curve round are wonderful, but its one of those walks that once you have done it you probably wouldn’t bother again because of the amount of road walking. 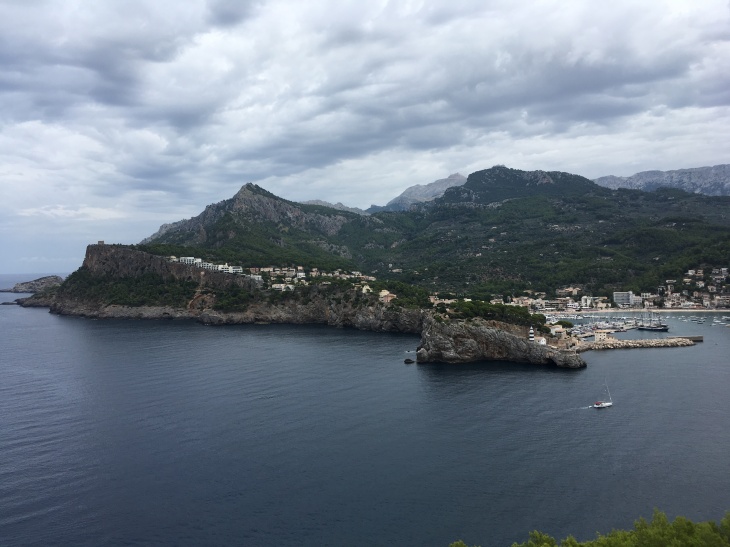 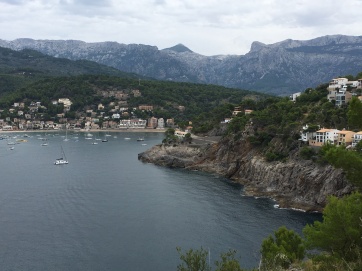 Tomorrow’s walk will be a challenge for me as it is 8-9 miles and over 2000ft ascent, never mind the descent. So, the most challenging walk since I recovered from my chronic illness. 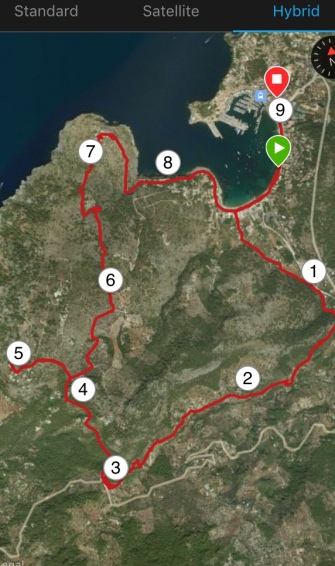 3 thoughts on “Day 2 Mallorca – Sóller round”