This was the start and end of our 9.45 miles hike, with 2219 ft of ascent and 2225ft of descent. There had been thunder and lightning overnight and the weather forecast suggested we may get significant rain at some point.

The bus journey took 45 minutes and went through very evocative scenery involving a series of hairpin bends and twists and turns. Our walk started in the centre of Valdemossa and we weaved out way through some of its streets to take us to our mountain footpath. We followed a valley uphill along a well trodden footpath through the trees. We had been warned there was 2 and 1/4 hours of ascent. At times, this was quite steep but it was mostly on a comfortable path. I became incredibly hot as I always do, and as I like to take photos I was often towards the back on the uphill stretches, at least to begin with. As we got higher the path became rockier, but still a good footpath. We were meandering along amidst the limestone as other days, but this limestone was not quite as sharp as yesterdays. All the time we were in the woods, the sun shone. 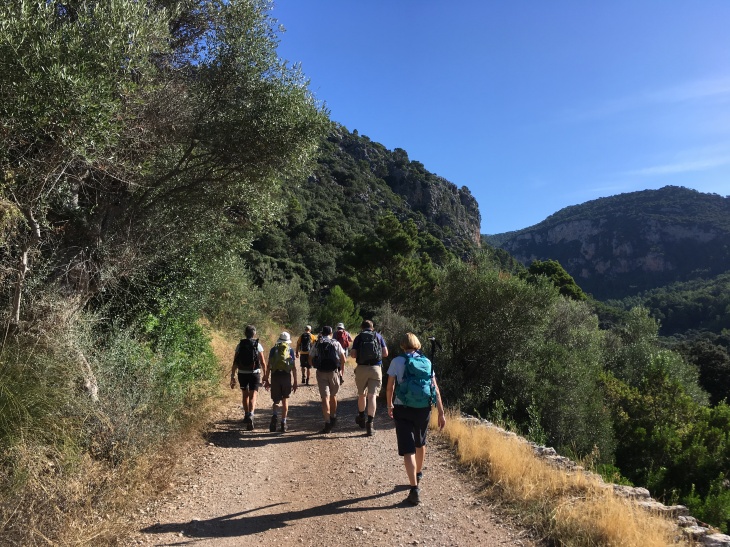 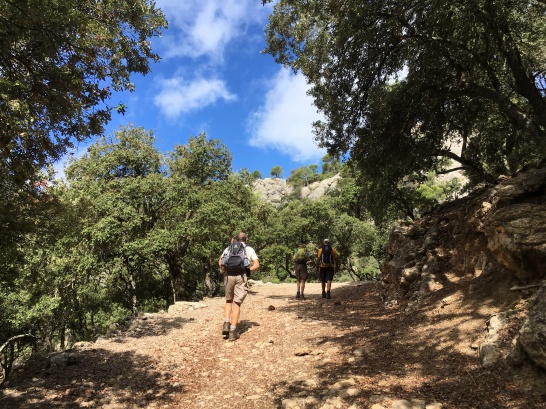 As we reached one of the tops, there was just time to take a photo before the mist descended like Mananan’s cloak, and the ridge walk was mostly undertaken in a linear arrangement, making sure we will didn’t step too far to the right and walk over the sheer escarpment to the west. ‘Man overboard’ would have been tricky for our leader to resolve. 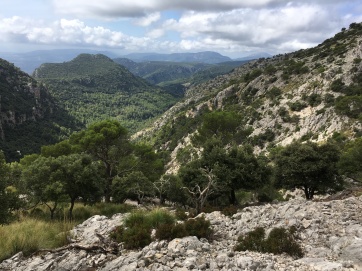 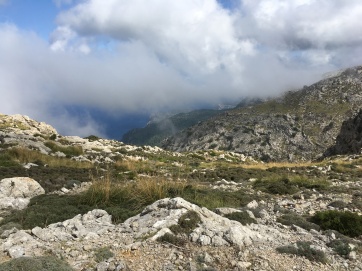 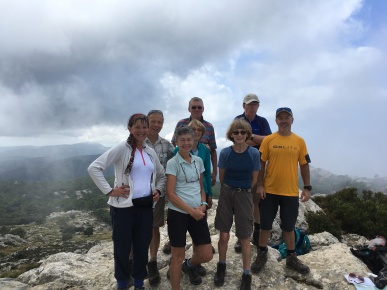 Even so, the ridge walk was splendid. The path is beautifully maintained and relatively easy walking. From here we descended along another path back towards Valdemossa. This was much like the uphill section in reverse. We passed the hermit’s cave, which looked to be quite a glamorous apartment with several rooms cut out of the rocks and a chimney. I don’t know when the hermit finally left, or indeed why he was ever there, but he would have had a reasonably comfortable existence if you like that sort of thing, which presumably he did. 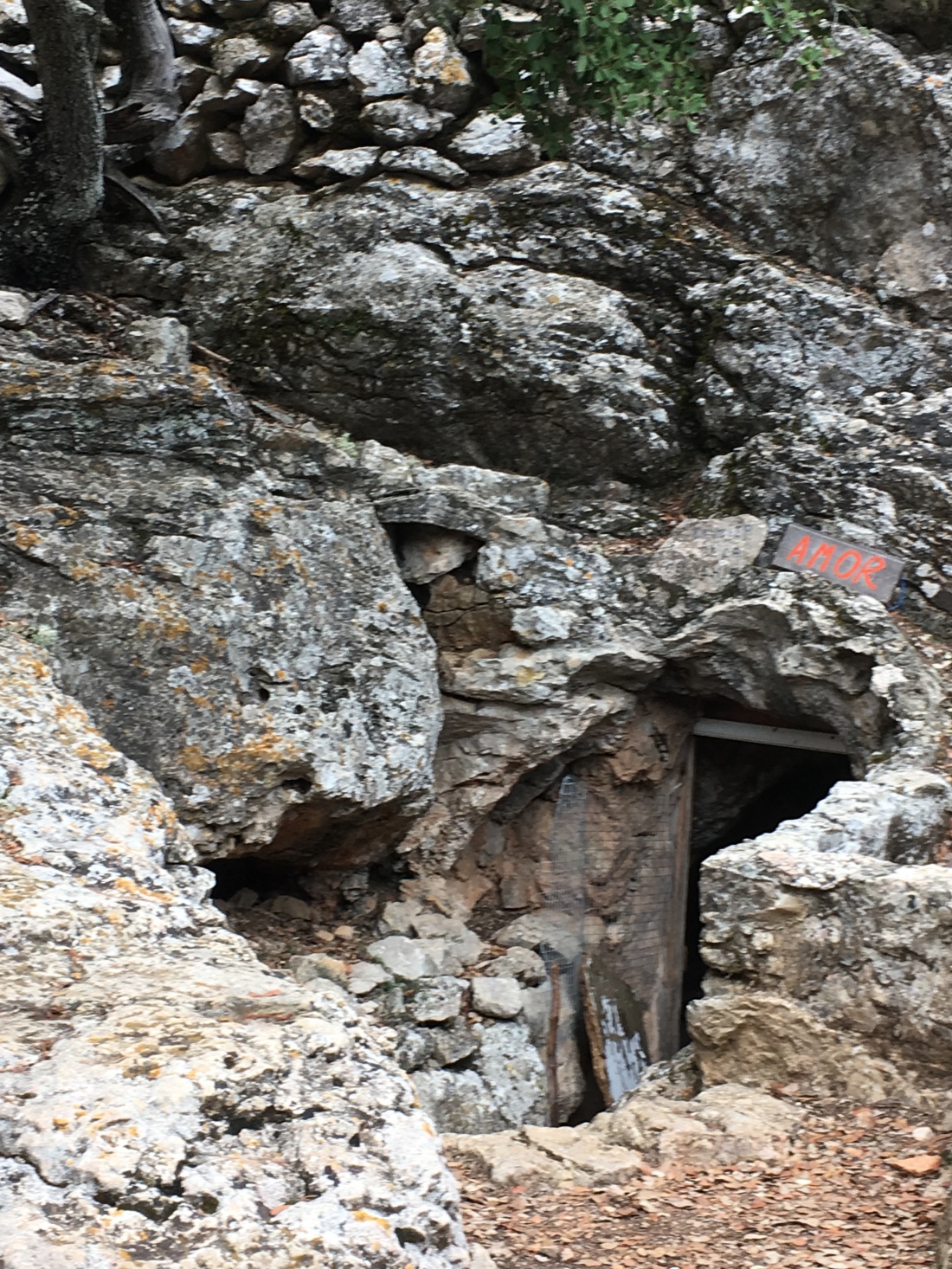 The rain came and went, came and went, as we descended, and it was noticeable just how a tiny amount of rain on the limestone made it slippery and difficult to keep your footing secure. There were one or two near misses as people slipped about a bit. It was also quite steep in places, but luckily there were odd trees to hang on to. The conversations dimmed at this point as people were concentrating on where they were going.

As we entered Valdemossa the heavens really opened, and as we were ahead of schedule we made our way to the nearest bar. Just as we finished our last glugs, the sun came out, so our leader Linda, took us on a tour of the old town of Valdemossa. It is a really pretty town and it knows it. It has an Italianate feel to it, with its design of houses and narrow streets. 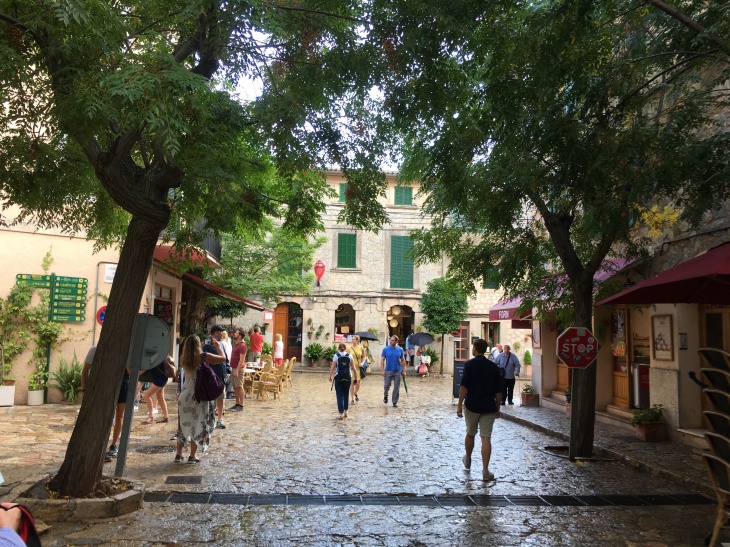