It was a beautiful evening after a wet and windy start to the day. Not ideal for my TT visitor, but he was content to potter around the village by which time it had brightened up, and it remained that way until it got dark.

Having had a tiring day watching the first day of Roland Garros, knitting, doing a spot of work but basically being idle, my conscience got the better of me and I strode out into the evening sunshine – not armed with camera tonight, just the mobile.

I walked from home along roads towards Ballafesson, then turned out off onto the Rowany golf club (no golfers in sight), walking beside the greens as far as Bradda East when I took the path to the back road, which afford wonderful views over sleepy Port Erin. 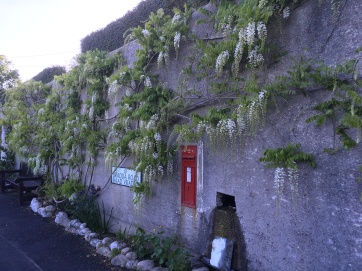 I veered off this road after about 1 km onto Tower Road beside a spectacular wisteria showing off to passers-by, which unsurprisingly turns into a dirt track and eventually leads to the Milner Tower. However, I removed myself from this path and followed a different one north which takes you across open grassland to the little knoll called? nothing at all on my 1:50,000 map, which is quite surprising as it has a distinctive cairn on the top. It was here I took the 360 degree video. Unfortunately, my wordpress plan does not allow me to upload videos, but I plan to put it on my FB “My Isle of Man Walks page.

I then walked towards Milner Tower, intending to climb its steps to the top but I could hear teenagers larking about so not wanting my peace to be disturbed I continued on my path. I thought how proud and majestic the tower looked tonight, with the light glinting off its turret. 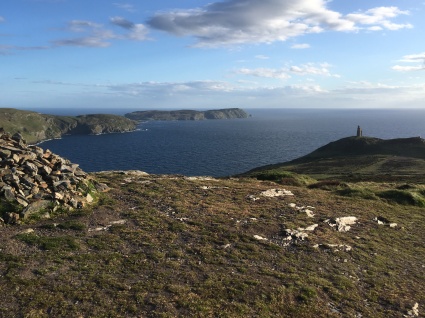 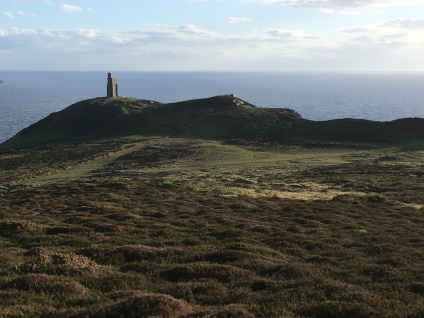 As I walked down the grassy bank, I was aware how few wild flowers I had seen. On the level ground at the top there is very little grass or soil, mostly worn away by the feet of walkers  and mine workers over many years; the thrift could barely keep a foothold there, but as I got closer to the cliffs edges I came across a host of wild flowers, including burnet rose, sea campion, stonecrop, scabious (the first scabious I have seen this year), bird’s foil trefoil, tormentil and many others.

I followed the usual coast path along its meandering way, past Bradda Glen restaurant, around the old swimming pool, back to Port Erin and Home. A delightful evening, where I barely saw a soul until I reached Port Erin. As I reached Spaldrick, I dared to look back and captured this slightly unusual photo of Milner Tower with the sun beginning to set behind it.

I have plans for two long walks, one from Colby and another from St.Marks. I just need time to do them now!