This was a fairly tough route, or at least it felt so by the end of it. It would have been easier had I walked it a different way round, but I ended with the majority of the climb towards the end of the walk – never a good idea!

I parked the car on the western edge of the Barrule plantation and followed the well trodden footpath downhill to the Glen Rushen river. Usually, this is a quiet route, but today there were several bikers also enjoying the route… but spoiling my peace. However, the countryside is there for everyone, as vouched for by my own TT guests who seem to be absolutely enthralled by our lovely island. 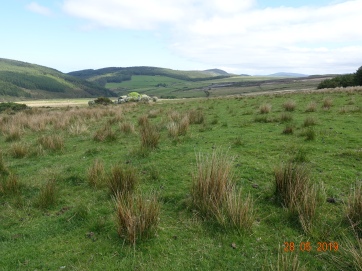 There are wonderful views in all directions, but perhaps my favourite view on the way down the hill was of this old delapidated farm house, protected by hawthorn trees. In the garden was a swing and I could almost hear the children playing and the grownups going about their daily duties looking after the sheep.

The further I went down the valley, the more interesting it became in some ways. I noticed old quarry workings beside the river that I hadn’t seen before, and a flock of long-tailed tits were twittering and flitting about in the trees. I stopped briefly by the Glen Maye waterfall, which was shrouded in sunlit mist and admired the vines dangling down into the river. 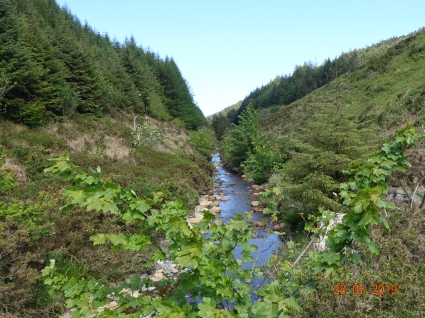 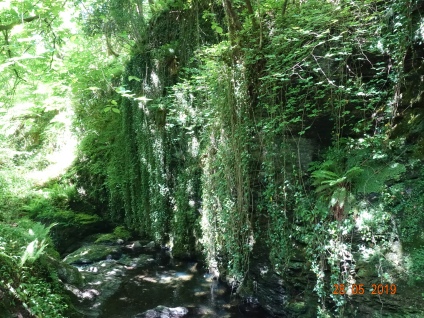 I was well protected from the wind at this point, something I became well aware of as I reached the beach at Glen Maye after 4.5 miles. This was to be my first lunch stop, but I can tell you, it was quite a short one! The white horses were more visible than they appear on the photos.

I climbed to the top of the low cliff onto the southern coastal path, which at this point is very short, as very soon afterwards the footpath follows the full length of the main Dalby road and there is no choice but to follow it. However, the views make it worthwhile. 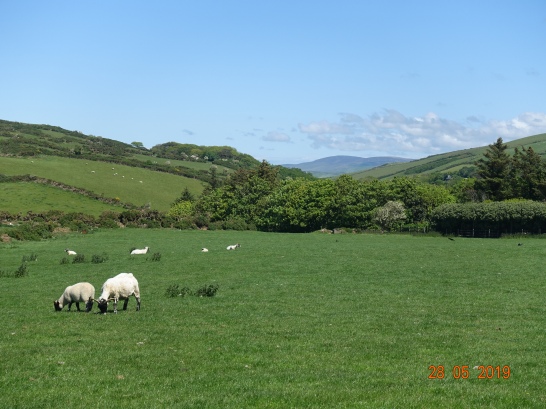 I walked down to Niarbyl – toilet stops and a cafe here if you want them –  had a quick look the the Tail of the Rocks, then followed the cliffs to Traie Vane where there is a quaint waterfall gushing into the sea. The locals call this Whitesand Bay , so named not because of any white sands but the very white pebbles on the beach. As I descended to the beach I was struck by the height of the reeds growing on the verge of the cliff. This beach is less frequented than others but it does have its own appeal. 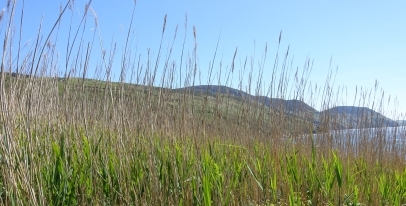 What goes down has to go up, at least if you are parked at over 1000ft, so I ventured back along the cliffs. The coastpath is not entirely clear here. The map shows it going inland and indeed I did come across a stile, but there was also a fairly well worn path continuing along the edge of the cliff, which looked far more interesting, so I continued round and eventually joined the actual coastpath at a junction with a track. There is no reason to go inland; this path is absolutely fine.

I was aware of what was not far around the corner, having often walked this route the other way round. I knew the path would wind its way downhill again, then I would cross a small stream and have a relentless plod uphill to the top of Cronk Ny Arrey Laa. For me, the first part was much harder than the seemingly steeper and rockier part towards the top of the Cronk. Low down it is just a steepish grassy slope, but I was quite breathless at times on this section, so just took my time. Of course, I had already walked over 8 miles and my fitness is not as good as it usually is, so I shouldn’t be surprised at this.

I debated whether to take a different path when I reached Eary Cushlin, but that would have involved another downhill section followed by more uphill – and road walking, so I accepted that it was better just to continue uphill to the top and then have a leisurely and flat warm-down walk across the moor back to the car. What I hadn’t realised at the time, was that I would be climbing 1300′ in 3/4 mile, although of course I was half way there by now. At Eary Cushlin the vegetation changes and you lose the green grassy pastures and it turns to purple heather and heathland and rocky paths. The views from the top are breathtaking:

And finally, the flat walk across the moor: 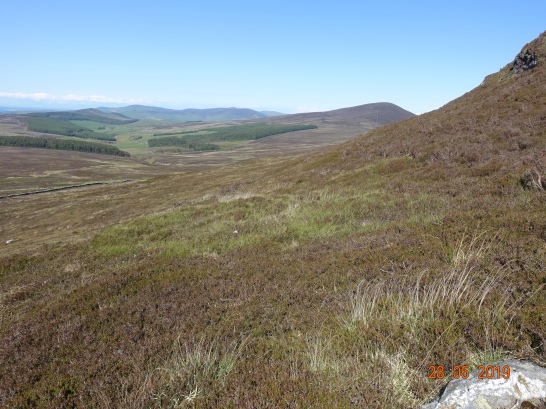 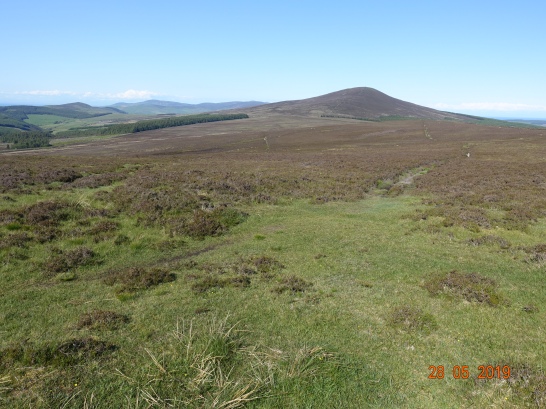 I shall upload the route in due course. This was a delightful walk, full of variety and a few surprises. If you are not used to walking, you can vary the route and shorten it, but why not take a few hours out and stop at various points and enjoy the wonderful Isle of Man scenery in all its glory.

Meanwhile, I shall continue to try and do one walk per week that is between 10-15 miles, and meanwhile keep up the 10,000 steps per day (5 miles for me) as often as possible.