What to do during TT (other than watch the racing)? Walk some of the Millenium Way of course.  At a risk of putting some of you off attempting it, the southern section is a mix of some lovely scenery, as in Silverdale Glen and some super views to the south, but a lot of road walking and, as it has been raining a lot in the last 10 days, muddy footpaths.

I met up with a friend who I had met when I hosted the Facebook U3A walking page for the Isle of Man, and we boarded the number 12a bus at Port Erin railway station which took us to Ballasalla for the start of our walk. From here, we walked down to the Ford, where a biker walked into the water, stood in the middle for a second or two, then retraced his steps to the other side! Strange…

We followed the lovely Silverdale river past the Monk’s Bridge (above) up to the boating lake where we had a short break, then continued past the old waterworks – or more correctly, the now defunct spring water factory to the main Ballamodha Road.

This is the first stretch of road walking,  which in itself is not unattractive – it affords great views of South Barrule – but the road was relatively busy by Isle of Man standards.

We were quite relieved when after a mile or so, we turned off the road onto the footpath, that would eventually take us to St. Marks. At one point, we went through a farm yard where a friendly dog kept yapping at us to the consternation of its owner. At the far end of the farm was a sign pinned to a barn, saying in no uncertain terms that persons should “shut and fasten the gate, or be liable to a fine of forty shillings”. We duly shut the gate, not having forty shillings on us, and continued on the path, which appeared to peter out shortly afterwards. We continued northwards across a field, before I thought this was wrong route and we retraced our steps to find a very clear sign pointing across a different field, which we had missed completely because of the angle of the sign on approaching it. Here started the mud, and many gates that were only fit for very skinny people and not people with rucksacks. The grass was long and wet which helpfully cleaned our boots intermittently. As we went over a shrubby stream, Ros saw a frog. At various points on our walk we saw a small copper butterfly, a female common blue butterfly and a number of dead birds! As we approached Crosby we did see a bird of prey but could not identify it. 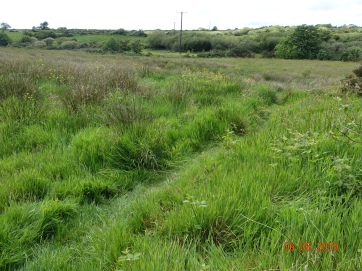 On, over the grassy meadows and reedbeds, we finally reached St. Marks where we had lunch and visited the absolutely delightful church; simple and unassuming, warm and welcoming. You can even help yourself to tea and coffee, but as we had brought ample supplies for ourselves, we did not partake. 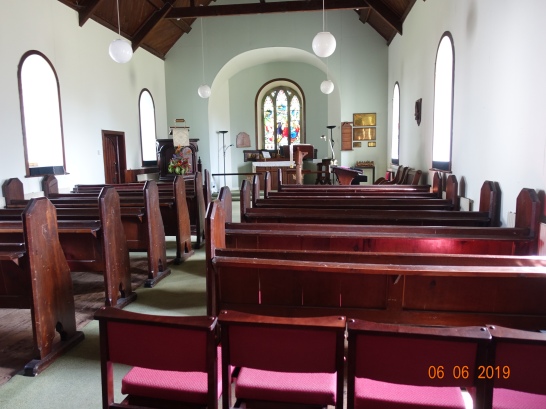 From here it was more road walking, but this time on quieter roads that barely see traffic, but do bring with them views to the north and the valley in between.  This walk makes one aware of what a watery place the Isle of Man is, with streams at the end of every few fields. There is no doubt that even walking along roads makes you aware of the local scenery in a way you wouldn’t otherwise see it.

As we came closer to Crosby we could hear the buzz of the motor bikes and saw what we thought was a TV helicopter following the racing. On this stretch of road, Ros found an abandoned egg shell. It was almost the size of a hen’s egg, was buff coloured and very slightly speckled, as you can see in the photograph. If anyone can identify this, please add a comment to this blog. 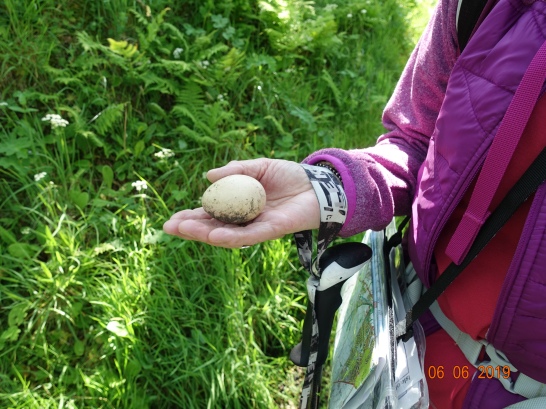 Unfortunately, I have had a problem with my Achilles tendon for the last month – I know, nothing stops me walking until I am forced to face the problem – and as we reached Marown old church, where we were due to turn right to go to Glen Vine, I was forced to take a break. At the same time, who should come out of the church but a friend from choir who happens to live just down the road from me! What a happy coincidence. Ros and I had a half second discussion and decided we should ask if he was going back to Port Erin. And, of course, he was. My poor ankle was so very grateful. We had been intending to walk another 4-5 miles along the railway track back to Douglas, but my foot clearly thought otherwise. Someone up there was obviously watching over me today, as I can be my own worst enemy.

This opportune event allowed said friend and I to catch up and Ros and I passed a very pleasant 20 minutes sitting comfortably in his car listening to stories and finding out what is happening elsewhere. He dropped us off at our respective houses and continued on his way to Shoprite. And I, for once, did as I was told and bathed by ankle in ice cold water. So, probably no more walks for a bit – sad face – and a holiday in Crete – happy face – but I do have a short but interesting walk to write up from walking around and inside the cliffs of Port Erin this last week, so another blog to follow shortly. 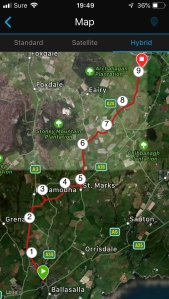