I was on a belated holiday in Crete with Titan, having had to cancel my planned journey to hopefully see the northern lights in February due to having to have what now appears to be an unnecessary operation.

I was looking forward to a rest after an exhausting six months or so. I knew it would be hot, but I was not expecting it to be so hot, or having to walk 1/4 mile to and from breakfast / reception several times a day and climb numerous steps. Yes, I know, I could have used the lifts, but you know me!  I was staying at the Royal Aldemar Mare at Hernosissos. It is a huge complex, with umpteen swimming pools, public and private; several restaurants where you can gorge yourself to death on the sumptuous foods. I particularly enjoyed the Greek salads, but there was a huge variety of hot and cold foods, some traditional Greek, others catering for a wide range of nationalities. The hotel is a marble palace and has a very attractive entrance. The bedrooms are ample, and we were greeted with a full welcoming basket of fruit, water and wine. So, all good.

The holiday was a mix of excursions and rest, and there was plenty of free time. Our guide, Maria, was a fount of information, and we learned a lot about the history and mythology of the region. We visited a nunnery on the way to the Dikti caves, Unfortunately, as with many of these tourist attractions, people are buzzing around everywhere and it is hard to get photos without tourists in them! The view from the nunnery was outstanding, although it was quite hazy the day we were there.

Just beyond the nunnery in the Lasithi plateau at Psychros is Zeus’s cave (Dikti) complete with numerous stalactites and stalagmites, and the mythological story of how Zeus ate his children to stop them overpowering his authority (the Greek equivalent of the Roman Saturn). This was quite a climb up a steady path in the soaring heat, which proved too much for many. This was followed by the descent into the cave below down and up 200 easy but occasionally slippery and wet steps, but in truth this was easier than the initial climb up to the entrance of the cave. 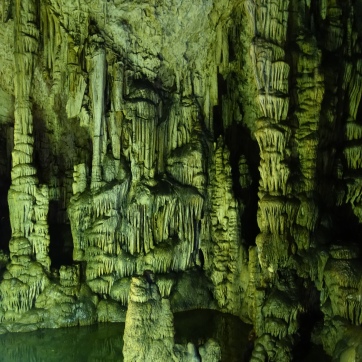 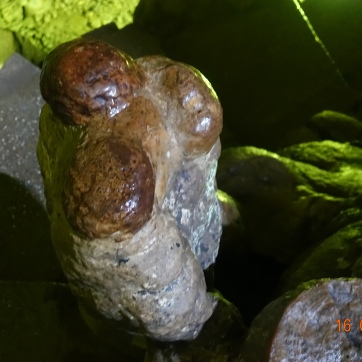 Heraklion, the capital of the island, is quite a nice place. The quaint and narrow streets are fun to walk around and there are a few interesting things to see. On my day off I walked the Venetian Walls of Heraklion, saw the Bello fountain, a 13th Century Byzantine church now converted to accommodation, the interesting St Matthew’s church and various statues; perhaps my favourite place there was the Venetian Fortress which has recently been renovated and now houses a fine museum, containing enormous  canons and canon balls amongst other things. I also visited the Natural History museum with the aim of finding out more about the geology of the island, only they were more interested in life size dinosaurs and earthquakes. There was a section of live animals, mostly snakes, lizards and frogs too. 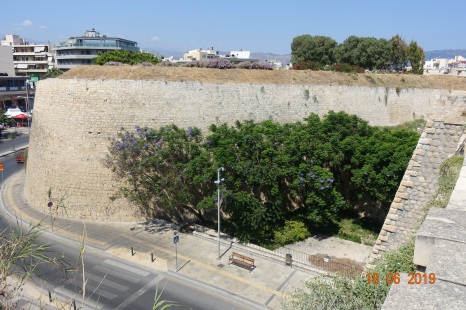 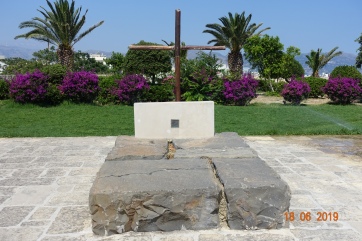 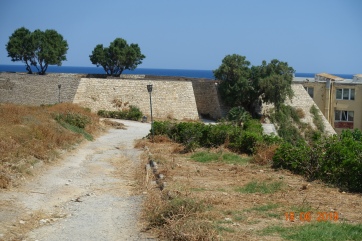 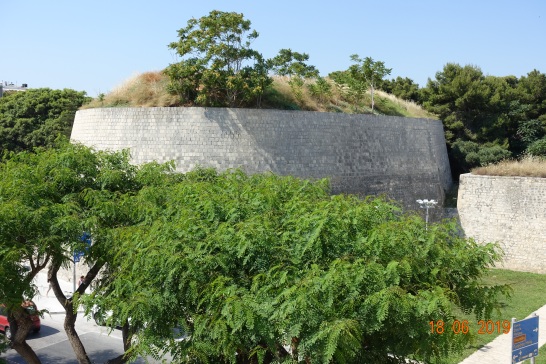 The photos above show the city walls of Heraklion and the tomb of Nikos Kazantzakis, who was born in Heraklion in 1885. He wrote Zorba the Greek and more infamously also wrote the Last Temptation of Christ, which describes Jesus as having conflicts between his religious duties and desire for human life and love. This caused his downfall and excommunication and he was not able to be buried in a cemetery inside the city walls; instead his grave lies in the Tower of Martinengo on the walls themselves and bears a wooden cross. The inscription reads: I hope for nothing; I fear for nothing; I am free”.

In the photo top right, you can see that the walls have an inner sanctum. I don’t know the original purpose of these, but this one has been transformed into an outdoor theatre. Another photo appear to show spiky seed heads of a flower on a stalk. This is far from what it actually is, which is many white garden snails glued to the flower stem. I found these all over the vegetation on the top of the walls along with the ubiquitous painted lady butterflies.

One of the most interesting ancient monuments I have ever visited was the Minoan Palace of Knossos just outside Heraklion. This was far larger than I was expecting and has been extensively excavated and is very well maintained. Our tour guide was simply outstanding on this trip and her enthusiasm gripped us all. Being informed of the history really helped to bring this alive. The area was first occupied in 7000BC but the Minoans developed this site much later than this in the Bronze age around 2000BC before it was abandoned somewhere between 1300 and 1100 BC. It has been described as Europe’s oldest city. 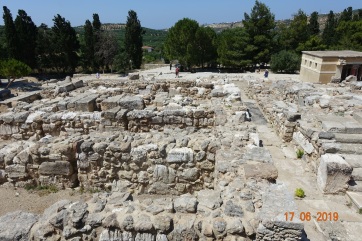 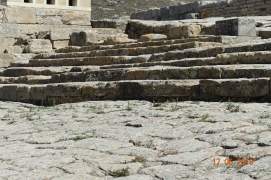 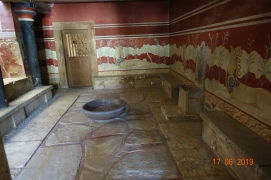 One of the main archaeologists who uncovered most of the finds was Arthur Evans in the early 20th century. The photos above show the original courtyard; the round stone supported the tree trunks that formed the pillars of the Minoan palace – these of course, have decayed. There is a lot of rebuilding and renovation but it does not detract from its appeal. Some of the stone pots on display were massive, easily 5 ft tall. Imagine the skills needed to create these pots and the power required to move them. They have handles top and bottom through which rope was strung to enable them to be rolled, though I suspect they were placed on carts to get them to their original  and final destinations. The Palace was highly decorated with frescos; the original frescos are in the Archaelogical Museum in Herklion (well worth a visit). It is also the site for the tale of the labyrinth and Theseus of minotaur fame.

We also visited the very pretty Chania on the north western edge of Crete, but this was so so busy and hot I couldn’t bear it. We started walking through an indoor market – need I say more?

I walked around the Turkish section and the Venetian section but was not overly enamoured by this town, though on reflection I did see some nice sights. On balance I preferred Rethymnon about an hour away from Chania. This was quieter with less of an ego than Chania 🙂 Here they have upgraded the traditional donkey ride to horse and cart. We were lucky to be invited to see how filo pastry is made, apparently the best in Greece. 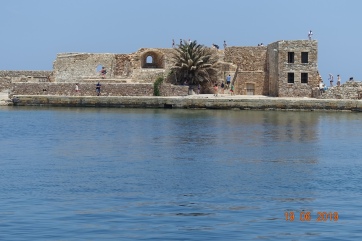 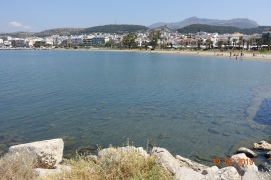 And finally, Spinalonga, a former leper colony now made famous by Victoria Hislops’ novel “The Island”. It does in fact have a longer history than this, due to its strategic location guarding the entrance to the bay of Elounda. I suspect most of us enjoyed this  because of the very refreshing boat ride on a small private boat, with the light wind gusting around us providing relief from the incessant heat 🙂 It was heaving with people and this tiny island could barely cope with the influx of visitors. The photo lower left shows the building where the lepers lived. 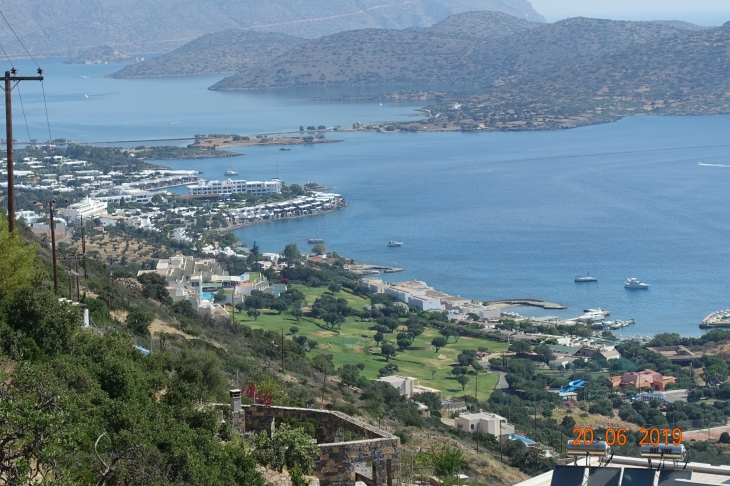 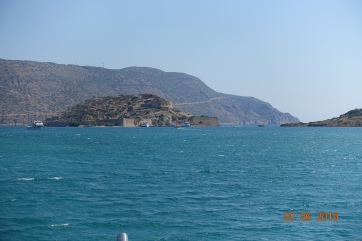 The images below are mostly of Agios Nikolaus. The two with mountains as their backdrop are Elounda. The lake is at Agios Nikolaus; it was previously separated from the sea, but it has now been made into a small marina mostly for the local fisherman to leave their boats in safety. This was a small and calm town closer to Heraklion than Elounda.  On the edge of the harbour and located within a huge car park (!) is the bronze sculpture of the bull with Europa on his back. The sculpture designed by Nikos Koundouros and created by Nikos and Pantelis Sotiriades, tells the story of how Zeus, in love with the princess he called Europa, changed into a white bull; she jumped onto his back playfully but he whisked her away to Crete despite her tears 😦 .  They are said to have landed at Matala on the southern coast (where there are sandstone caves, the entrances now lifted high by the rising earth), where the bull became human form, resulting in 3 children with Europa called Minos, Rhadamantus and Sarpida.

Elounda it is a very expensive area, not surprising given how beautiful the area is. 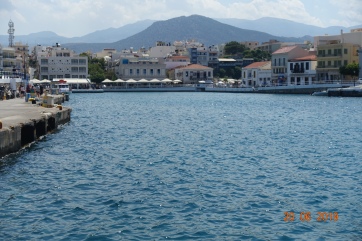 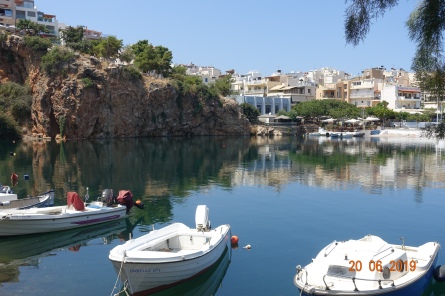 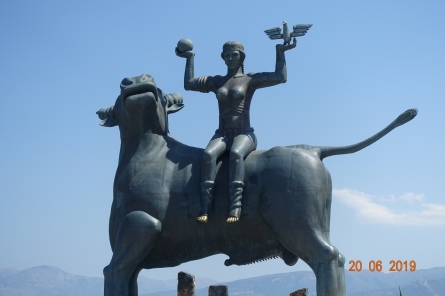 Back at the hotel, it has its own private beach, and it was wonderful to sit out there in the dying sun with the waves lapping against the sandy gravelly beach. There are sandy beaches further down, but it is not a wide expanse of beach,  but enough to dip your toes into if you want to, or swim if you like that sort of thing. I met some lovely people and the other guests at my hotel made me very welcome. Even so, I am glad to be back to the peacefulness and cool airs of the lovely Ellan Vannin, my home. 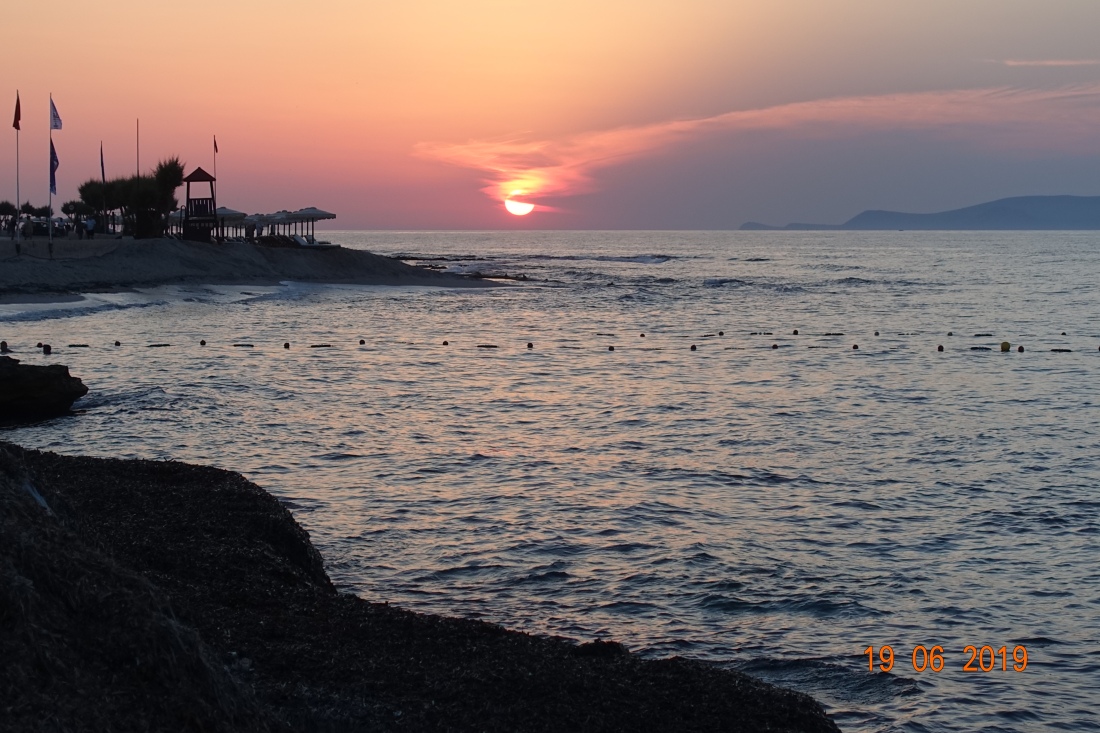