It was a lovely afternoon for a bog exploration. I was out with Manx Wildlife Trust on Dalby Mountain, the only peat bog owned by MWT near Eary Cushlin. I have been here before and knew what to expect: bouncing bogs, heathers, bog cotton, bog asphodel and rushes from which lights were made in times gone by. The orchids were over, but the heathers were abundant as well as deer grass and the wonderful tiny sundew hiding in the spagnum moss.

After this I had planned a short walk as I had never been into the Kerrow-Dhoo plantation. It was hot day by Isle of Man standards and a woodland walk would be refreshing. I was not disappointed. My walk downhill mostly meandered beside a steep and enclosed valley with enticing views through the trees to the upland hills. There was just a wiff of breeze to cool the air and the tall trees masked the sunlight. The path was easy to follow and delightful. However, a word of warning: this may be only a short walk of 1.5 miles, 589 ft downhill, but it is very steep in places necessitating some grabbing on to branches or roots at times. I wasn’t wearing the best footwear but it is all manageable. And of course, what goes down must go up again to return to the car. The ascent was 663 ft in 1.65 miles. 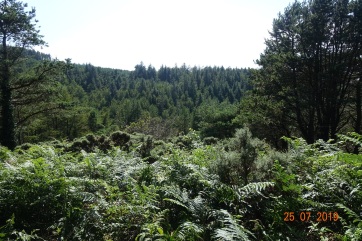 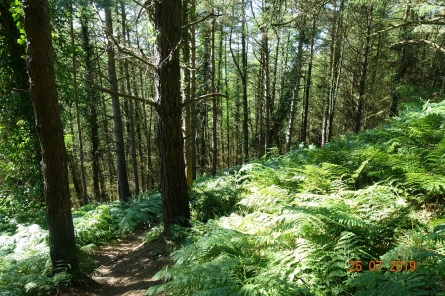 Having had glimpses of the stream I was following I was thrilled when the path crossed over it from one hillside to another, and even with my trainers on I could not resist scrambling up the stream a bit to see what it was like around the bend and beyond the overhanging trees. Once on the other hillside it is not far until Barrane, a tiny hamlet tucked out of sight just south of Dalby, a place where you feel no-one notices or cares as time goes by.

It was here that I found myself in someone’s back garden as the footpath seemed to want me to go that way. At that point two dogs started barking and a man called out “Who goes there? Fee Fi Fo Fum….” – no, not really,  but he came to see what was going on and showed me where the path really went! And then offered me a cup of tea in his lovely cottage – don’t ever let it be said that Manx people are not friendly.

I had intended to take a different path – the one shown on the OS map – to return back through the plantation, but Tim persuaded me that I should go the coast route, which I did for a short time but I then returned to the main track and watching the butterflies perusing the brambles I made my way back to the car. There are some wonderful views on this section of the walk but be prepared for the uphill! It doesn’t go on for long, but you will notice it. 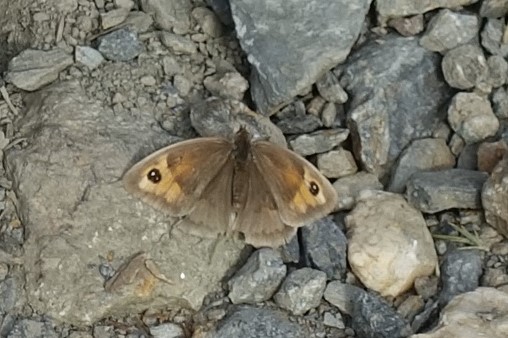 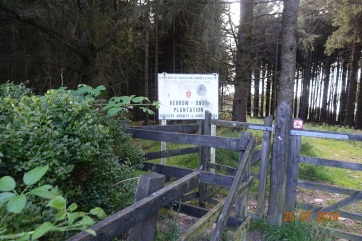 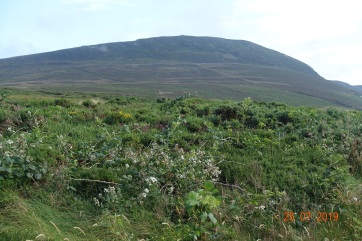 The final photos are of Cronk My Arrey Laa and South Barrule, along with one of the entrances into the plantation. 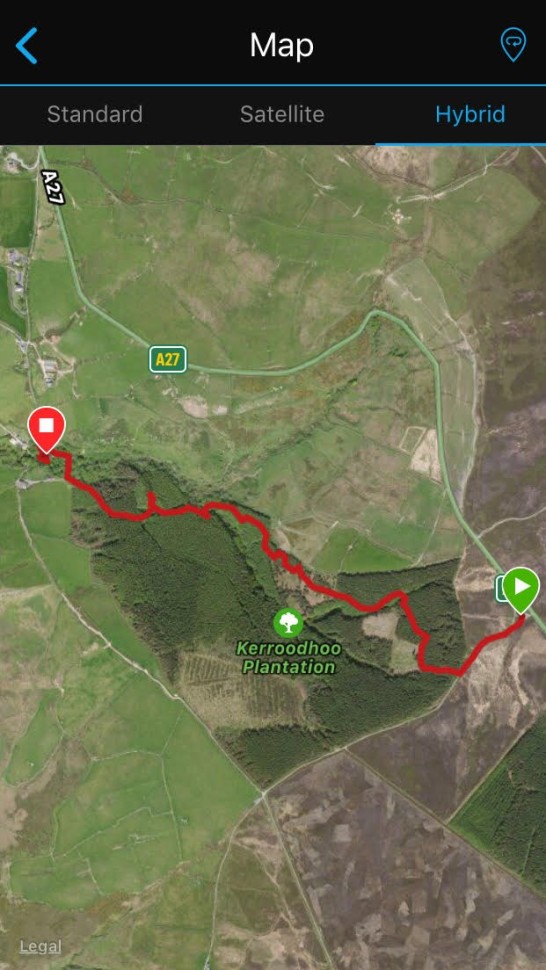