This week saw the last of the steam train journeys until next spring, so what better way to go into Douglas than to hop aboard at Port Erin and disembark at Port Soderick to walk the 5 miles into Douglas. 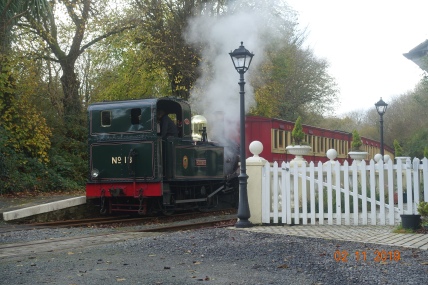 Here is the Kissack, no 13, waiting to leave Port Sorderick.  As I walked down the lane I encountered a convivial lady sportingly cleaning up the road for vehicles as all the drains were blocked by the autumn leaves and the excessive rainfall of recent days, leaving great puddles. That’s what I call neighbourliness.

I walked through the glen which was a little on the muddy side. I never known the Crogga stream to be so loud as it made its way downhill and then softened as it gained the lower reaches, just every now and again bubbling over the rocks. 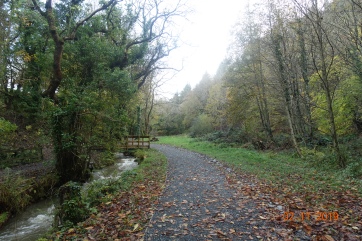 Reaching Port Soderick Bay, I never cease to amazed how this area was once a bustling pleasure beach, with all kinds of attractions and businesses – outdoor games, a camera obscura, Thomas the ‘novelty card’ printer, roundabouts and such time as well as  the now defunct and removed Falcon Cliff lift that enable to tourists to have a leisurely (if ugly) route to the top of marine drive, where they could get the horse tram all the way to Douglas. It seems like another world. I do remember the hotel which was always good for a coffee but that has also long since gone. They are always talks of renovating this area. If so, maybe they could reintroduce the story of the Enchanted Isle off Port Soderick, which was sunk beneath the seas by the magician Finn McCool along with its inhabitants which were turned to granite pillars; the island rises out of the sea every seven years for just 30 minutes, when the inhabitants will be restored to life if they can place a Bible on the island in that time.

I followed the muddy path alongside the road to the top of the hill where I took the cover photo. These hills are steeper and higher than they look here at about 300 ft high. They are mostly the typical Manx group of rocks comprising mudstone, siltstones and sandstones of the Lonan formation. They form the standard thin and craggy beds of slate that were distorted by the uplift of mountain formation in the Silurian and Devonian period, and in places these are very dramatic. At Keristal, close to Port Soderick,  and towards Douglas you will find large slabs of paler sandstone giving a softer landscape. 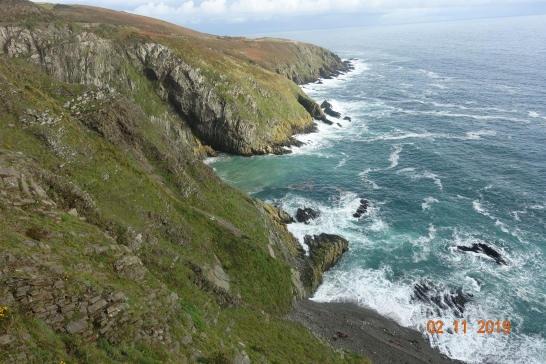 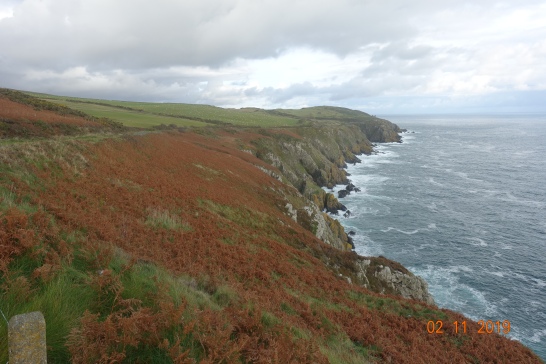 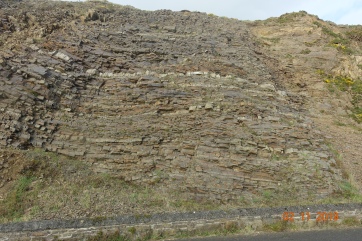 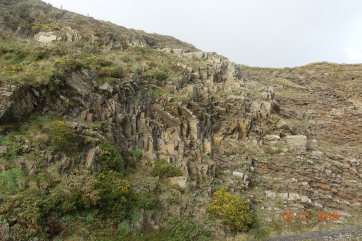 In places the rocks are quite architechtural, as here, close to Douglas Head gate house.

Marine Drive was constructed and the tramway opened in 1896 and was not the wide roadway as it appears today. In places an overhanging iron roadway was made to get around some of the tricky rocks and this section was suitably named ‘Horses Leap’. However, it was all dismantled between 1947 and 1949 partly due to rock falls. It was converted into a roadway in 1956 and over time it became a walkers’ paradise and the central section closed to vehicles. It is easy to see why when you walk the route. 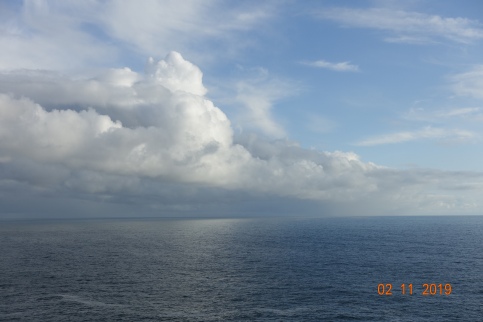 Having had only coastal views and wonderful skies, including an enticing rainbow as I reached the Whing (the steepest and most contorted of the rocks), it is all over too soon and soon the path starts sloping making its descent into Douglas. Looking at the clouds over the mountains I had time my walk just right. 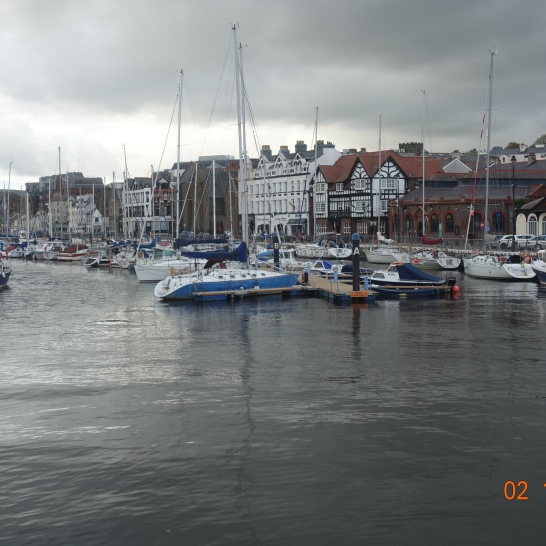 A very pleasant walk of 5 miles and about 733 ft of ascent, but it is very easy after the intial ascent and just little ups and downs along the way.