The title makes it sound as if this is an easy walk, but this was the hardest walk of the week. It started with quite a long coach journey before being dropped off in the middle of nowhere in the Parque Naturel de Las Nieves. This time I opted for the ‘harder’ walk and it certainly was harder than yesterday. After a brief level start we then climbed steeply up a rocky path for 400 metres through a most attractive laurel forest. I have been having trouble with a persistent but low-key cough for weeks and the steepness and difficulty of the climb made breathing difficult, especially as some of the walkers insisted on a fast pace, which basically I ignored. I never see the point of walking at speed on a holiday, where the idea is to see the views and imbibe the magic of the region. As yesterday, but for different reasons, the path was often slippery and a tumble was only the next footstep away if care was not taken. 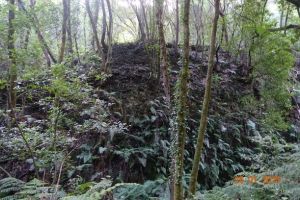 The laurel forest only exists between 500m and 1200m, so that shows the height we started at! It doesn’t lend itself to wonderful photographs except for the specialist, but the sun played around between the trees and there was a cooling draft that was very acceptable. Beneath the laurels are lower ground hugging plants such as tree heathers so the whole forest is a very pleasant mix of greens and where the sun can really break through wild flowers grow near the paths. The forest only exists because of the trade winds, which allow a cloud forest to develop bathing the forest in moist air. We reached the Mirador de Somada Alta,at 790 metres. which is just a viewpoint and a resting stage, then we continued more of less contouring before turnwards eastwards and returning to our starting point. I cannot emphasize enough the beauty of walking through these remote woodlands and they make a fine contrast to the banana plantations below and the bare volcanic rocks above.

From here we followed well made paths down to La Galga, where a platter had been prepared for the walkers in a local restaurant. There is a wonderful viewpoint of the Barranco de la Galaga here at the Mirador de la Galga, tucked behind the local church, and an equally impressive view in the opposite direction down to the sea. 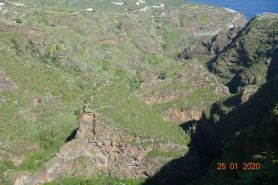 You can see how rugged and tricky the descent and ascent might be into the first ravine. We then followed a local path on the side of a hill which had been terraced for growing crops, such as wines, bananas, avocados, oranges and lemons. The lower terrains are covered with smallholdings.

Reaching the coastpath GR-130, the path undulated and made various twists and turns before we encountered our first major Barranco, which are steep-sided ravines, sculpted by water – hard to believe considering the tiny amount of water that falls in La Palma. They would originally have been faults in the lava flows which are then corroded by water. 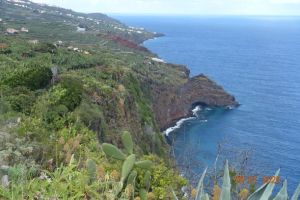 The first ravine near Los Galguitos (though the village was not visible from the path) was the steeper of the two, with a narrow rocky path to negotiate in  both directions, before we were able to continue contouring all the way to next ravine near Llano de Pino, which looked as if it would be daunting as at this point we reached sea level. But the ascent was much easier with intermittent level sections and with a few rest stops we soon reached our destination of San Andrés. This is a very attractive village with a beautiful central area around its imposing church, and lots of bars.

This was a varied and interesting walk, so different from the day before and different from anything else we would do. It was very exhilerating if demanding and we enjoyed a very welcome drink in the bar before getting the coach home