For a small island, it sure does pack a punch. The volcanoes in themselves are enough to take one’s breath away but it also has its calmer, more serene side where most people live scattered across the hillsides.

I took a day off instead of walking as my poor (big) toes were throbbing, I had blood blisters under both nails, the toes were swollen and painful and the thought of another long descent was not appealing. You will be pleased to know I don’t have a photo of my feet! On Day 3 I had a leisurely morning, caught up on some sleep and watched some of the Australian Tennis Open. Our hotel was magnificent. We were staying at the Parador de la Palma in Breña Baja, an ancient ‘suburb’ of Santa Cruz where they grow tobacco, apparently on a par for quality with Cuban tobacco. The hotel is relatively modern with extensive grounds which have been landscaped beautifully. It has a pool and a gym, neither of which I frequented, a lounge and a bar and a lovely enclosed patio area where one could sit and listen to the sound of water as one drank one’s wine, read one’s book or engage in mindless chatter.  And of course a restaurant. The food was out of this world and there was so much to eat I am glad to be home, otherwise I would end up a big fatty! So, all in all, a day off was very appealing. 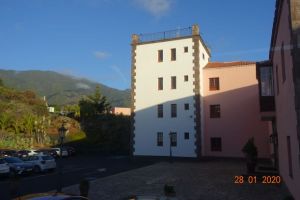 In the afternoon, having written some postcards, I thought I should venture out to post them and explore the local community, wearing comfortable pumps which would not put any pressure on my toes. It is impossible to avoid uphill but at least I was on tarmac. Off I went, expecting a gentle ramble, which indeed it was. I found myself turning this way and that and two and half miles and a 1000ft later, I decided it was time to turn back. I was already in the foothills of the Cumbre Veija by this point where the cloud forest begins and it was trying to drizzle. It was a happy ramble in that I was able to nose into people’s gardens, which were generally large houses or smallholdings. It is noticeable that most of the houses are two storey. No large tower blocks here.  As I turned onto the top road I felt I could almost have been in the wild west. Imagine those big doors on the photo below are saloon doors and imagine horses tethered up in front – imagination can run away with you here :-). The variety of vegetation on the hillsides was remarkable and so many wild flowers were out, many of which we only see in late summer, if at all. Most noticeable were the ‘dying swans’ of Echium which grow all over the island. 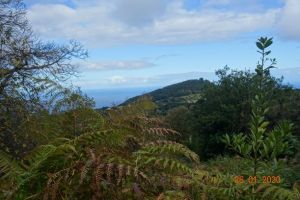 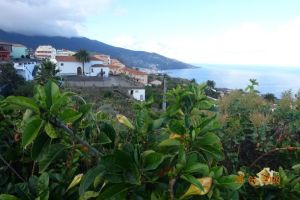 The next day was the scheduled day off. I knew I had to get some new footwear if I was to continue with the organised walks so I go the bus into Santa Cruz and bought a pair of HiTec walking trainers that were a full size bigger than I usually buy. They were cheap, costing me 50 Euros which included 3 pairs of socks. I had a walk around Santa Cruz which has some nice alleys , squares and drinking places such as the Calle Real, the main cobbled street, but I was not in the mood for exploring.

Santa Cruz is the capital of the island but not the largest city which is Los LLanos on the western side. It is positioned on an old lava flow that emanated from the volcano easily visible to the south of the city. It only has a population of 15,674 in 2018, so about 2/3rds the size of Douglas. The total population is 81,863, which is slightly surprising given that so much of the terrain is inhospitable. Santa Cruz does have one very strange claim to fame. Every 5 years it holds an event called The Descent of the Virgin of the Nieves, when there is a peculiar dance performed, called the Dance of the Dwarfs. Grown men over 6ft tall assume costumes of bishops then go into a shed and come out as dwarfs, with enormous triangular hats, and do a polka!! They don’t just do it once, but over and over again, all through the night. There is another annual tradition called Los Indianos, where all the locals dress up in white, men in posh suits and ladies with their parasols and straw hats, and talcum powder is thrown all over the place. Quite how or why these traditions have emerged is a deeply kept secret, but it does make one wonder what other plants might be growing on the island. If you are interested in visiting Santa Cruz there is a Naval Museum, churches with fine architecture and some interesting houses on the front. 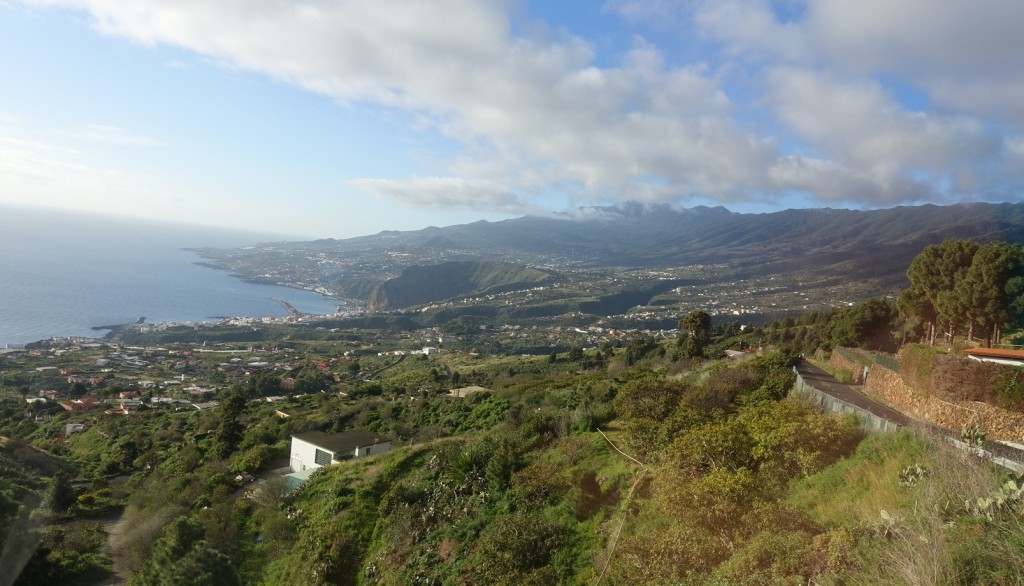 I had wanted to visit Los Llanos as it has an archaeological musuem, so I boarded the no 300 bus, paid the driver 2,60 Euros and off we went up and over the hills and through the tunnel to the other side of the island. I hadn’t a clue where to get off the bus, but I was fortunate in that I spotted a road sign to the museum so hopped off at the next opportunity. This is definitely worth a visit. I think it cost 4 Euros, but I could have had a pass for only a little more which would have given me access to other museums elsewhere. Of course, it explained about the volcanic construction of the island, but it also talked about the shepherding way of life and there were various artefacts and a few old bones to examine. I spent about an hour there before wandering around the rest of the town. 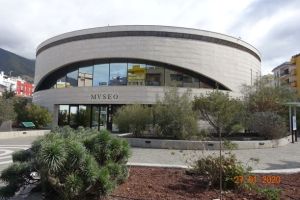 The west of the island has a totally different feel to the east which is more humid. As you come down the long windy hill into Los Llanos you cannot help but notice the vast number of cream-coloured greenhouses that look very much like low level warehouses from above, and it lends it a commercial feel. The greenhouses protect the bananas which have become a large part of the island economy. They are very dense bananas and relatively small, compared with the ones that are imported to the UK. Formerly the main product was sugar cane.

Los Llanos itself contains several roads that stretch uphill like boulevards, with established trees in the centre. It is quite a bustling town and has a happy feel to it, with cafes in the centre where tourists and local mingle. In one of the streets there are 11 Indian Laurel and Royal Palm Trees that were imported from Cuba, and indeed these are the symbol of the city. They are very dramatic and beautiful. Although not the capital city which is Santa Cruz, Los Llanos is bigger, with a population of 20,171 in 2018. It appears to be a sprawling city as other smaller towns are very close, such as El Paso, but each has its own identity. Los Llanos is unlikely to claim the capital spot as it lies 325 metres above sea level so cannot compete with Santa Cruz for trade in quite the same way.

Having done my city tours, I got the 300 bus back, but managed to get off at the hospital and change to the no 35 which stops outside the Parador. I had enjoyed my day. I managed to wear in my new boots without causing any more problems to my toes and I was all set then for out Day 5 Walk which was to be an absolute treat, walking about the largest and highest volcanic crater on the island – and I shall tell you about that, tomorrow.