I had been warned by the taxi driver that this is quite a strenuous walk with a lot of steps, so I knew what to expect.

I set out early in the morning and was on the cliffs shortly after 9am. I decided to miss out Icart point and start with a gentle route down to Saints Bay, following another gladed valley. I soon hit the coast path contouring around several small bays, including Bon Port to Jerbourg Point.

At Moulin Huet car park, be careful to follow the map and descend along the road. The path then takes you through some light woodland before you ascend once again on the open coast path. There are one or two ins and outs on this stretch giving some variety to the walk, but whenever you turn a corner, the views are splendid. Renoir created some of his masterpieces here and there are several information boards showing you the view he was capturing. Below is one such scene.

There are two viewpoints mentioned on the map on the Jerbourg peninsula and it is worth taking your time here. The close up view of Les Tas de Pois d’Amont (translates as Pea Stacks) which have been visible all the way around this large cove is magnificent. The path continues around the point to join a lane which leads to the Jerbourg hotel. If you have had enough of steps by this point you can while away your time in the hotel having a cream tea, and then catch the bus (no 81) which will take your on a tour of the island back to St Peters Port.

I do not say this lightly, as the next section begins with a lot of descent and more steps, in the sure knowledge that you will have to ascend the same amount before long. This is a kinder path and slightly more undulating than straight up and down and you get the first views of Helm and Sark and the Castle at St Peters Port.

I had set off in fine sunshine, and pleasantly warm. I was also aware of dark clouds looming over the land and I was forlornly hoping that I might escape rain. This was not to be, but thankfully there was some tree cover and I waited patiently for a gap to appear in the lashing rain before I continued. Patience was clearly not a virtue and was going to make no difference, so I set off again for Fermain Bay, where I could see a cafe beside the beach. It was just about noon and I had walked 6 miles. I enjoyed some warming cups of coffee, had a chat with a local who had been swimming and I think wished he hadn’t bothered and ate my packed lunch. The tide was almost in but it looks to be a lovely beach and on a nice day I bet the locals come down here. 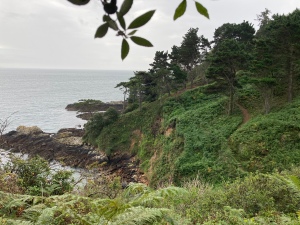 There was a brief respite so I set off again, yes, you can guess it, uphill again through woodland at Ozanne Steps and past some houses that had the most scenic and uninterrupted views of the sea. Leaving that path, it takes you to the Clarence Battery at Les Terres Point, an outpost that has guarded St Peters Port for centuries. From there it was a steady descent along La Vallette into St Peters Port.

I didn’t spend much time here today. I wanted to get back to the hotel, dry off and catch up on some sleep! So I boarded the bus, which showed me the delights of the area and dropped me off outside my hotel – very convenient.

I don’t know how many steps there were altogether, but it must be hundreds as there were usually about 30-40 minimum on each ascent. The total distance was 8 miles, descent 1726ft and ascent 1427ft. This walk started with descent, and it is this combination that makes it a little tiring. But it is so rewarding, and if you have a fine day, I would recommend it.

The weather forecast for tomorrow is not great, so I am thinking of doing a hop on hop off bus tour to the other side of the island and maybe do a bit of shopping.