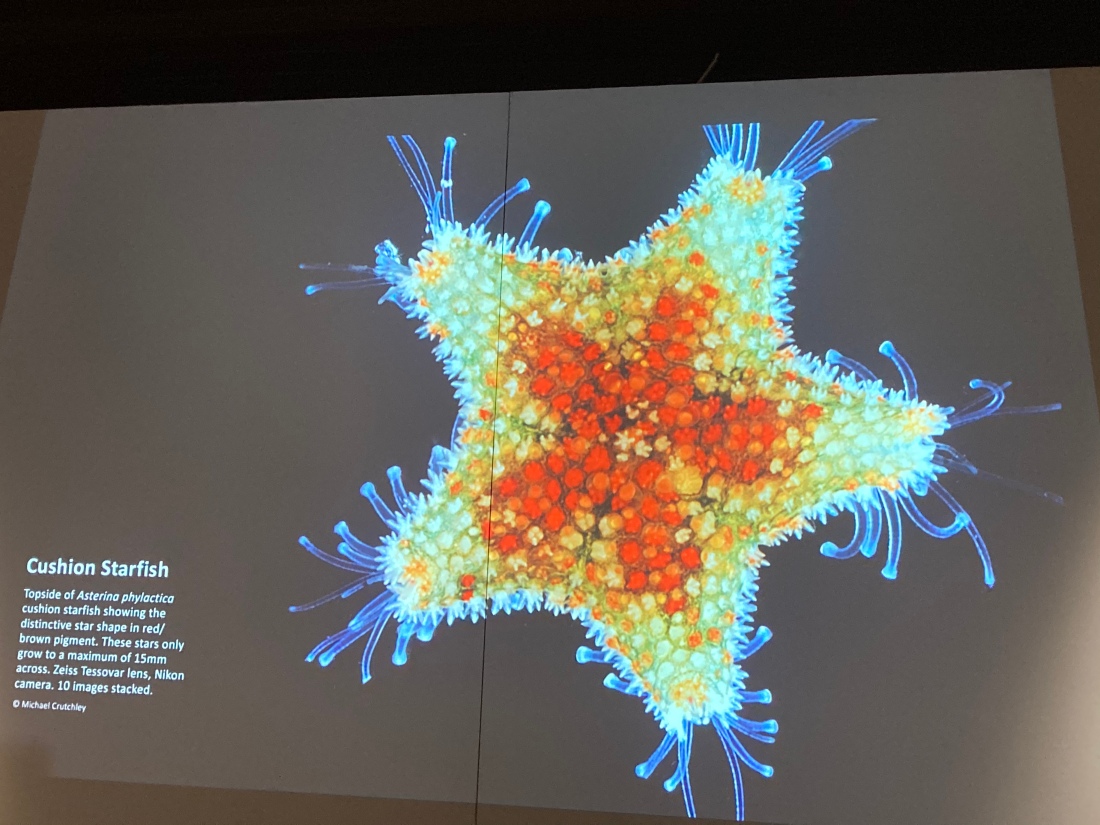 Overnight the rain had been teeming down, waking me up several times. I decided a day doing touristy things might be the best solution and involve at least some indoor activities. 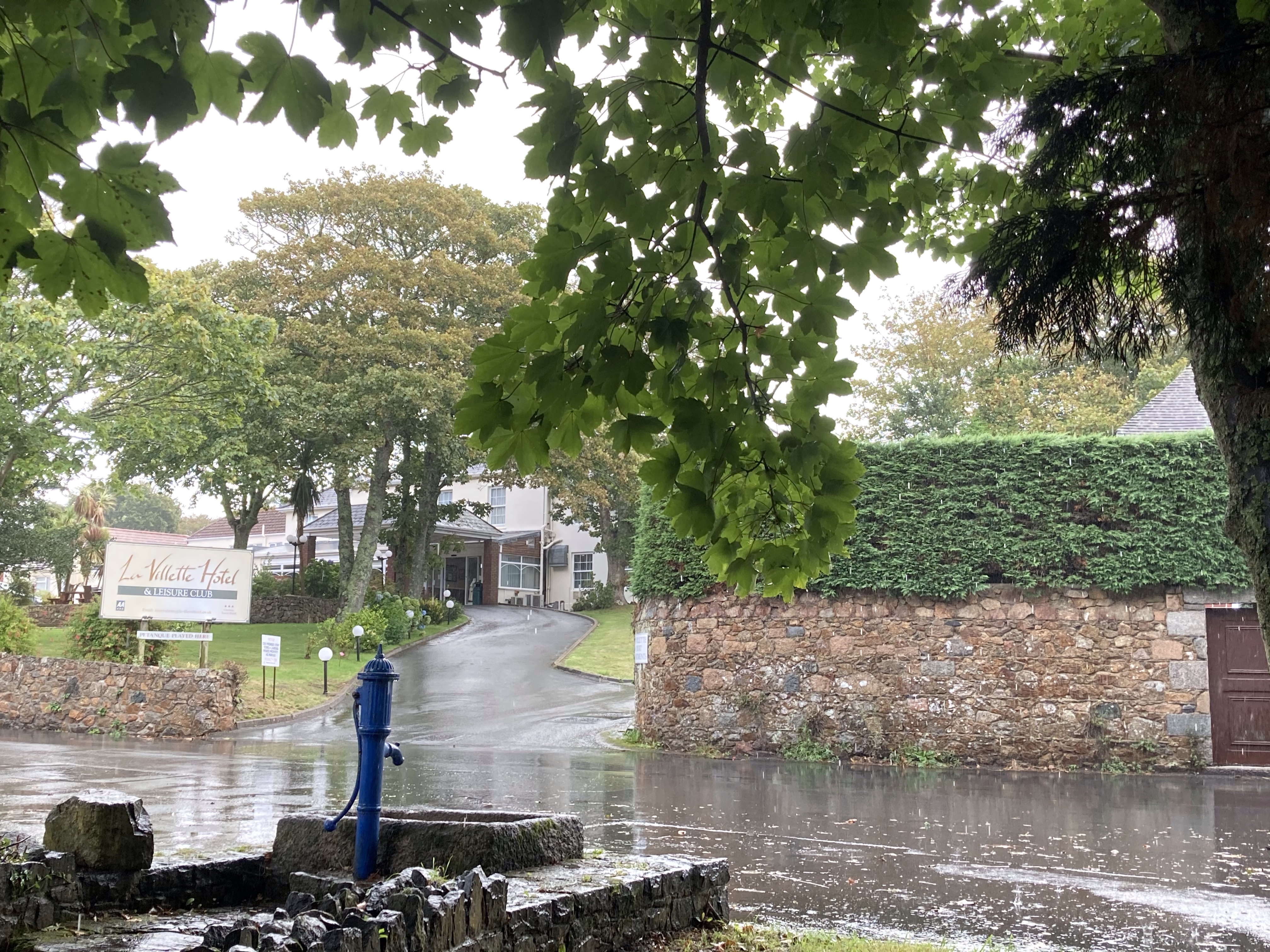 No sooner had I reached the bus stop and the rain pelted down. I was glad to embark the no 81 bus even if it meant an ultra tedious 4 mile 40 min journey to St Peter Port. It makes Traa Di Liooar seem almost instant in comparison. It isn’t even an interesting route – it goes down little residential lanes that go nowhere in particular and the inevitable visit to the local hospital en route. 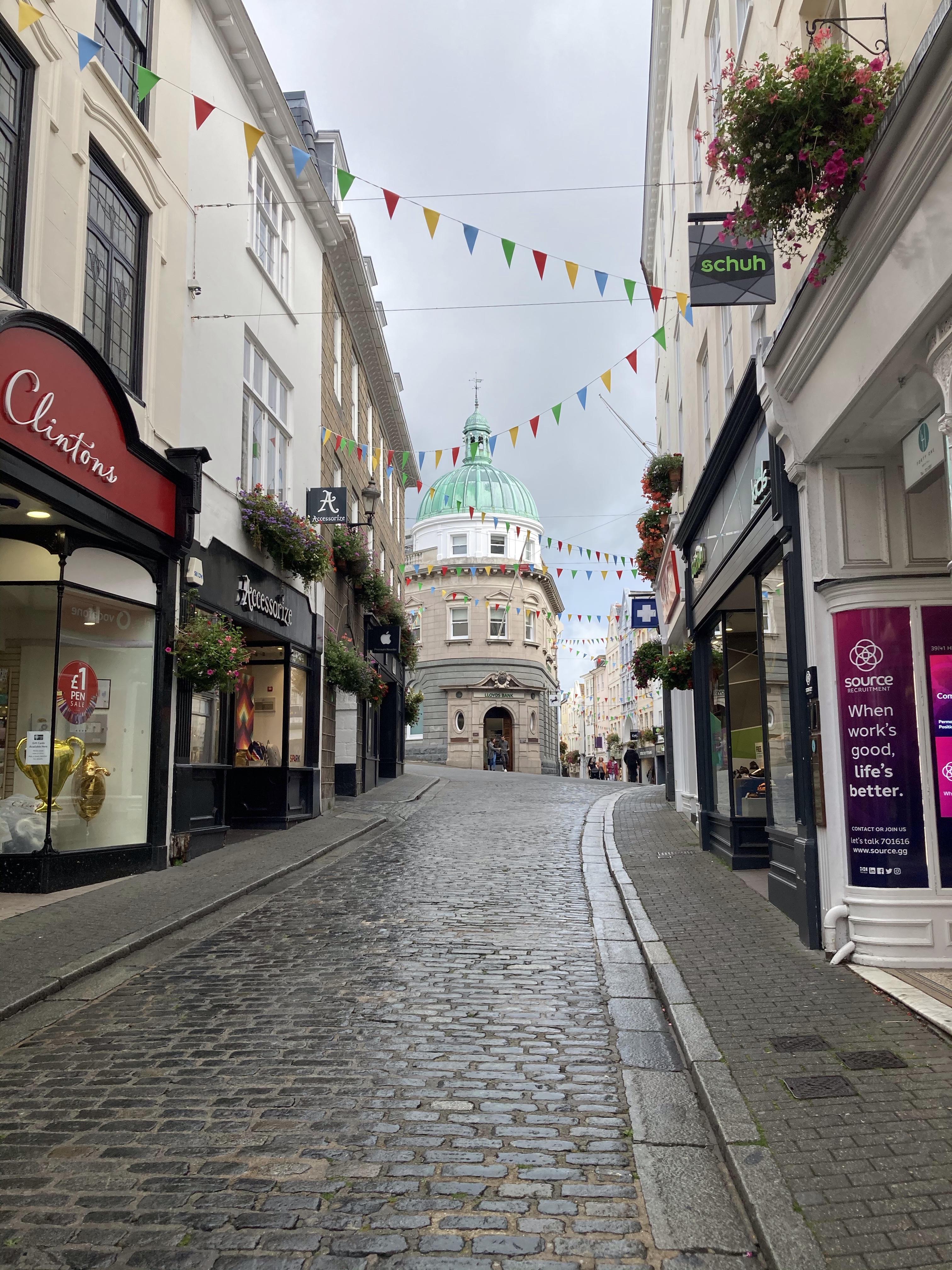 When I finally reached St Peter Port, I had already decided to go to the Candie Gardens, which were reportedly very pleasant. Should it rain, it handily also contains the Guernsey Museum and Art Gallery. I followed the quaint Main Street, though I must admit I was disappointed not to see more local shops. There were all the usual department stores such as Boots, M&S, WH Smith but very little else it seemed on first acquaintance. Thankfully, there was a charity shop so I bought an umbrella and gave Cancer Research £3.50.

It says in my guide book there are ‘no hills’ on Guernsey. Would someone please tell me what I have just climbed then a couple of times today at 300 ft each! What strikes you most about St Peter Port is the amount of huge stone walls and the many steps up these non-existent hills. It looks like a grand fortress or a town that has barricaded itself in against the enemy. In fact, this is true of previous centuries; even if it hasn’t been invaded for a long time, it still bears witness to its past. 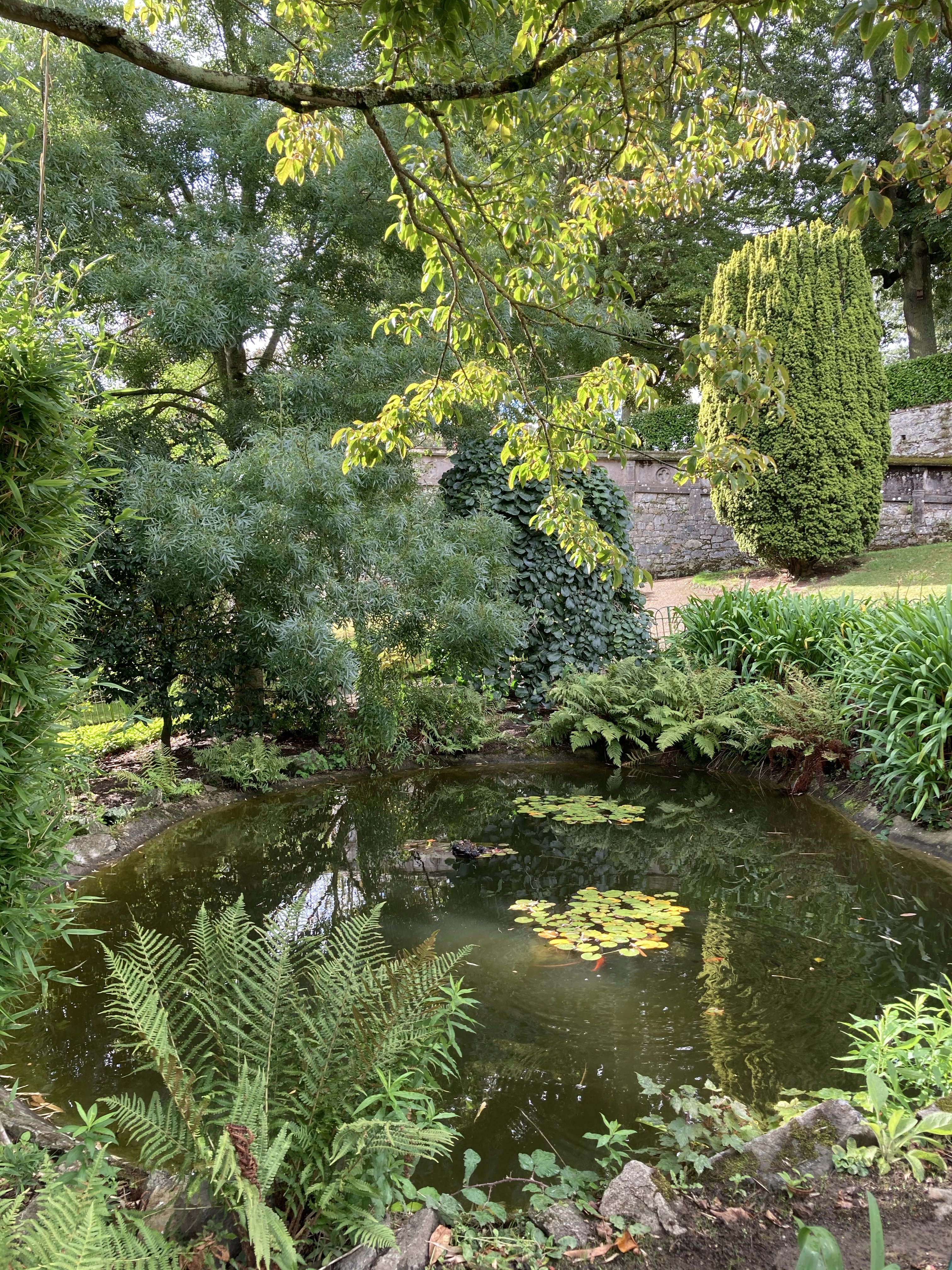 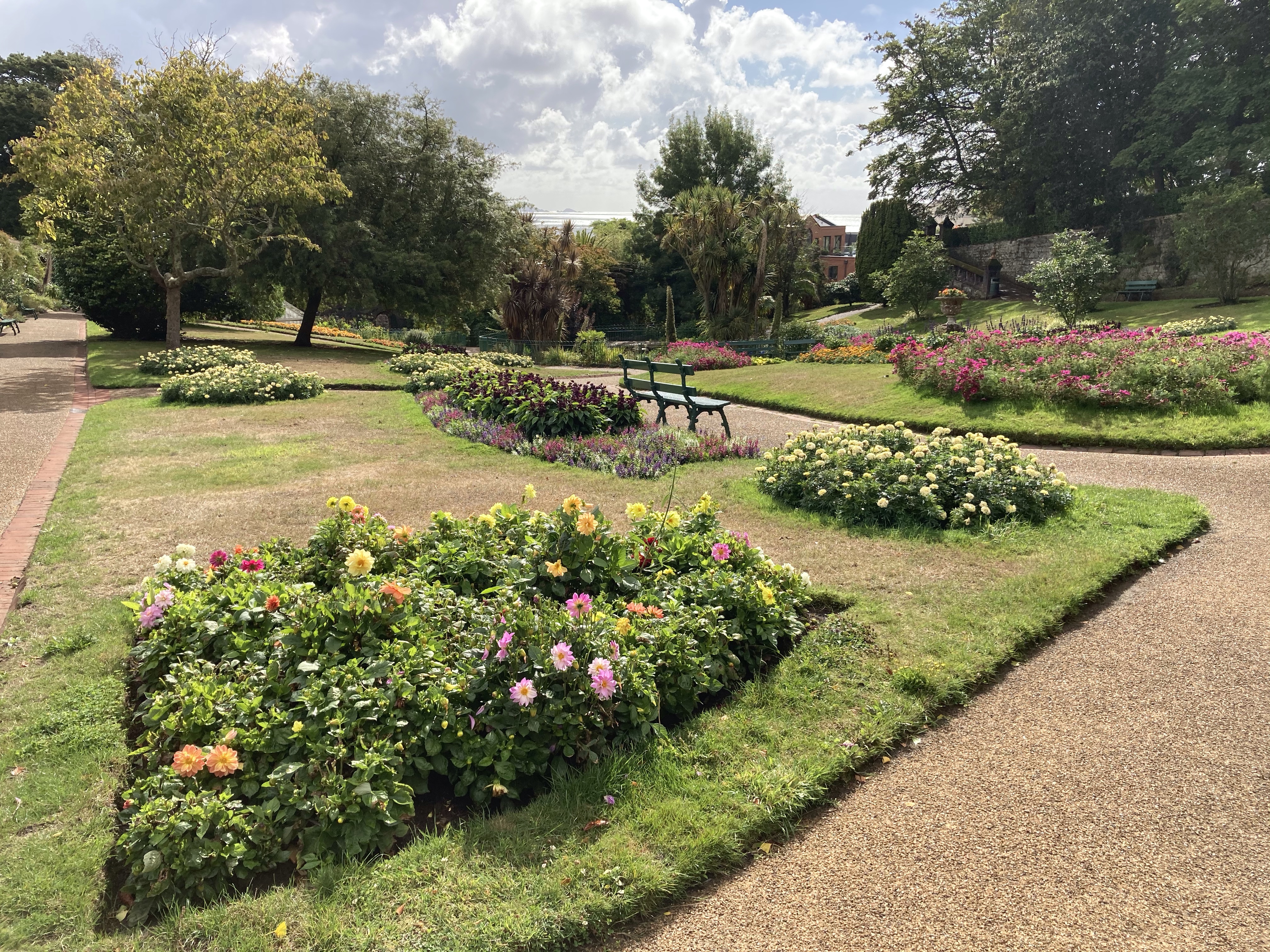 Candie Gardens were quite pretty but nothing out of the ordinary. The museum and art gallery is good, though it hasn’t quite decided what it wants to be. There are quite a few exhibitions concerning the war, which is clearly important to the island and interesting for many people. There were three different sets of art exhibitions. One by an artist with big colourful designs; another of incredible photographs of sea animals in microscopic detail; and yet another of more traditional paintings and a sculpture ( for want of a better word) of butterflies by Damian Hirst – the central photo below. This was staggeringly good and intricate and it was hard to take ones eyes off it. You want to expand that photo to enjoy its intricacies. I wonder how long it took him to complete it? 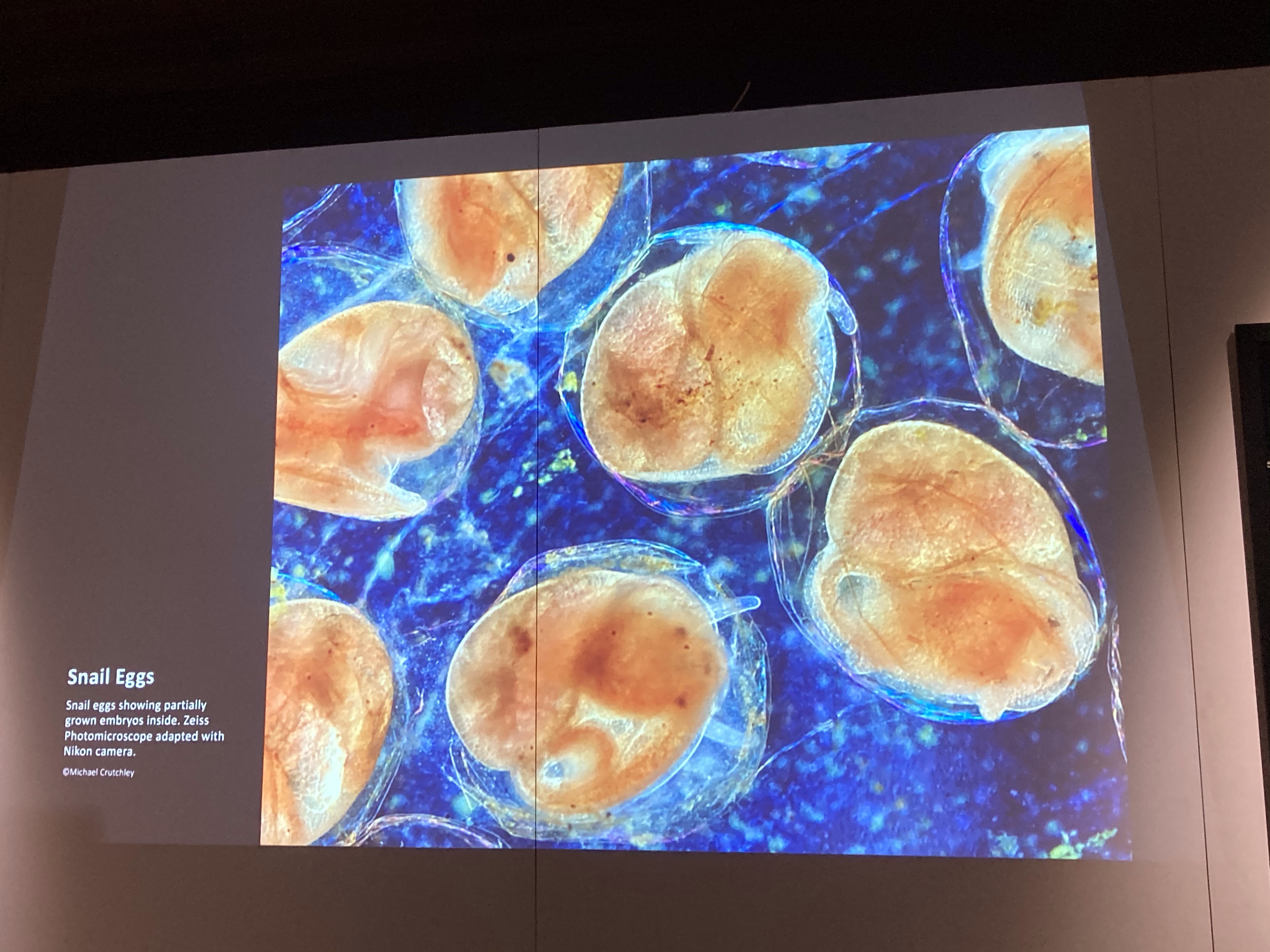 The shop did contain items for sale created by locals and the glass ornaments were beautiful, and I could not resist buying something for my grand-daughter whose birthday is next week which will make her smile 🙂

It had already been pretending to rain while I was in the gardens and when I came out of the museum, it started up again in full fury. Undaunted, I continued with my plan to visit the Chateau des Marais, which looked on the map to be a modestly sized ancient mound. Of course, it was too wet to consult the map so I had to use my mind map to get me there, which did a fairly good job. 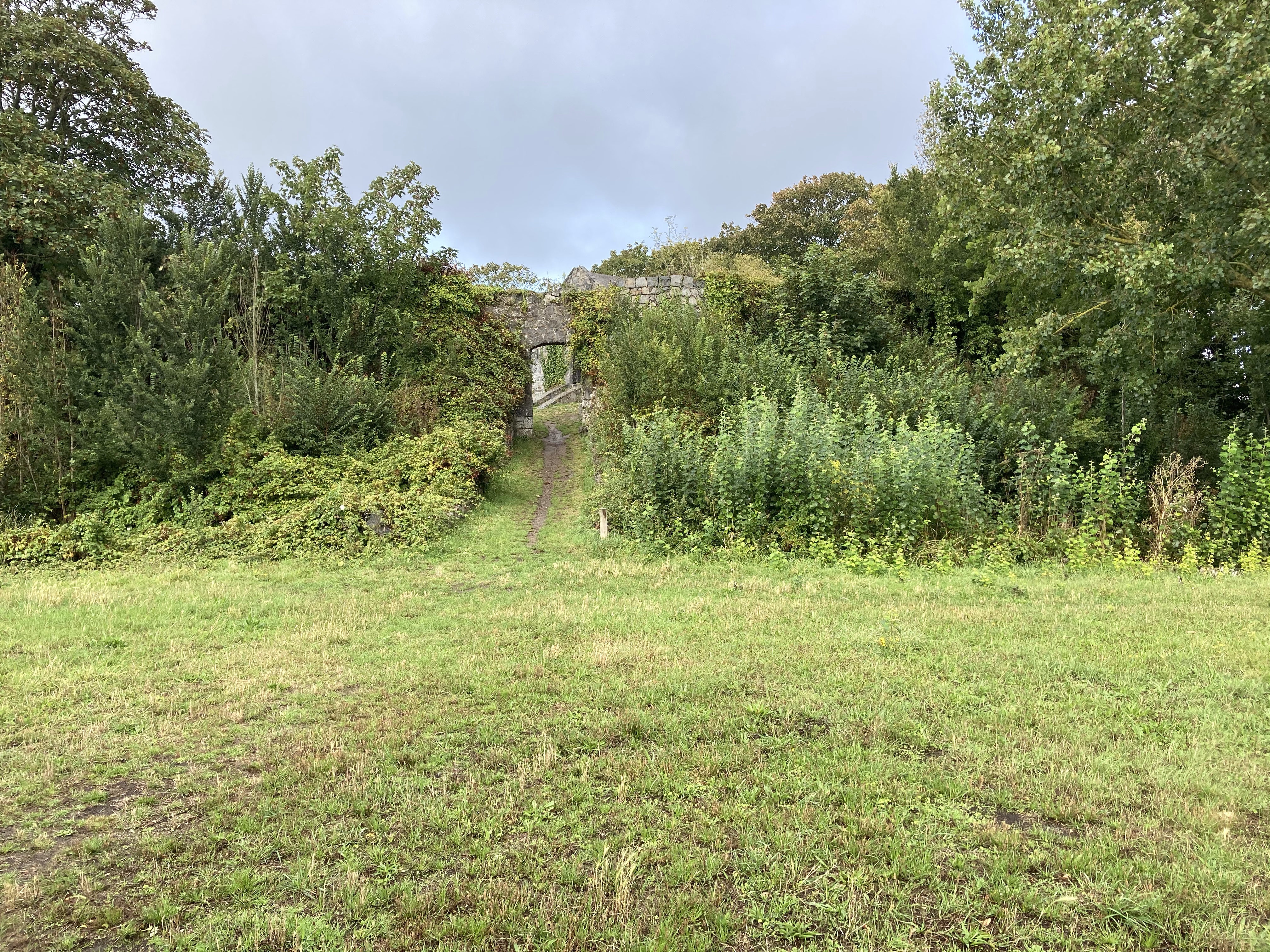 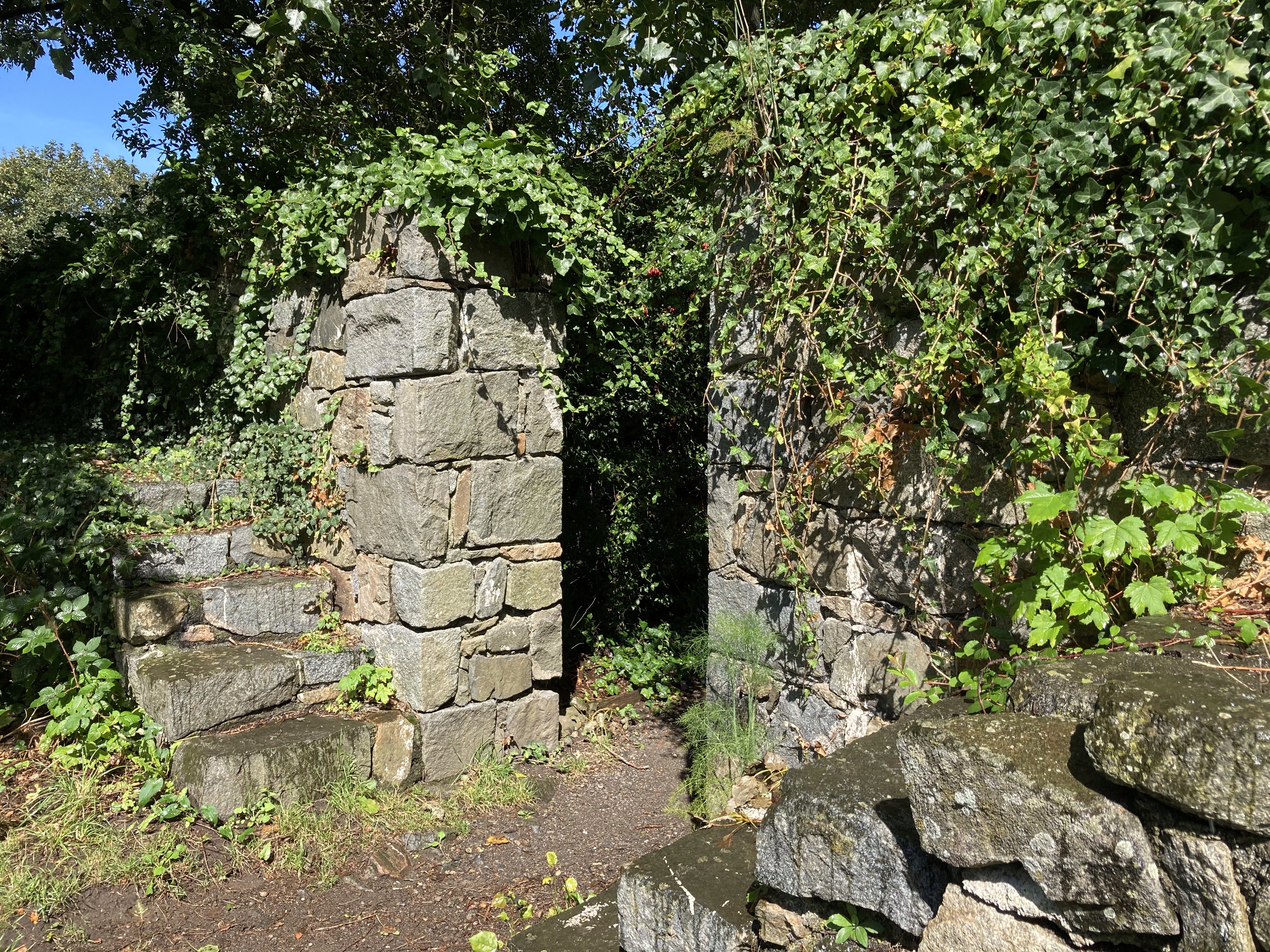 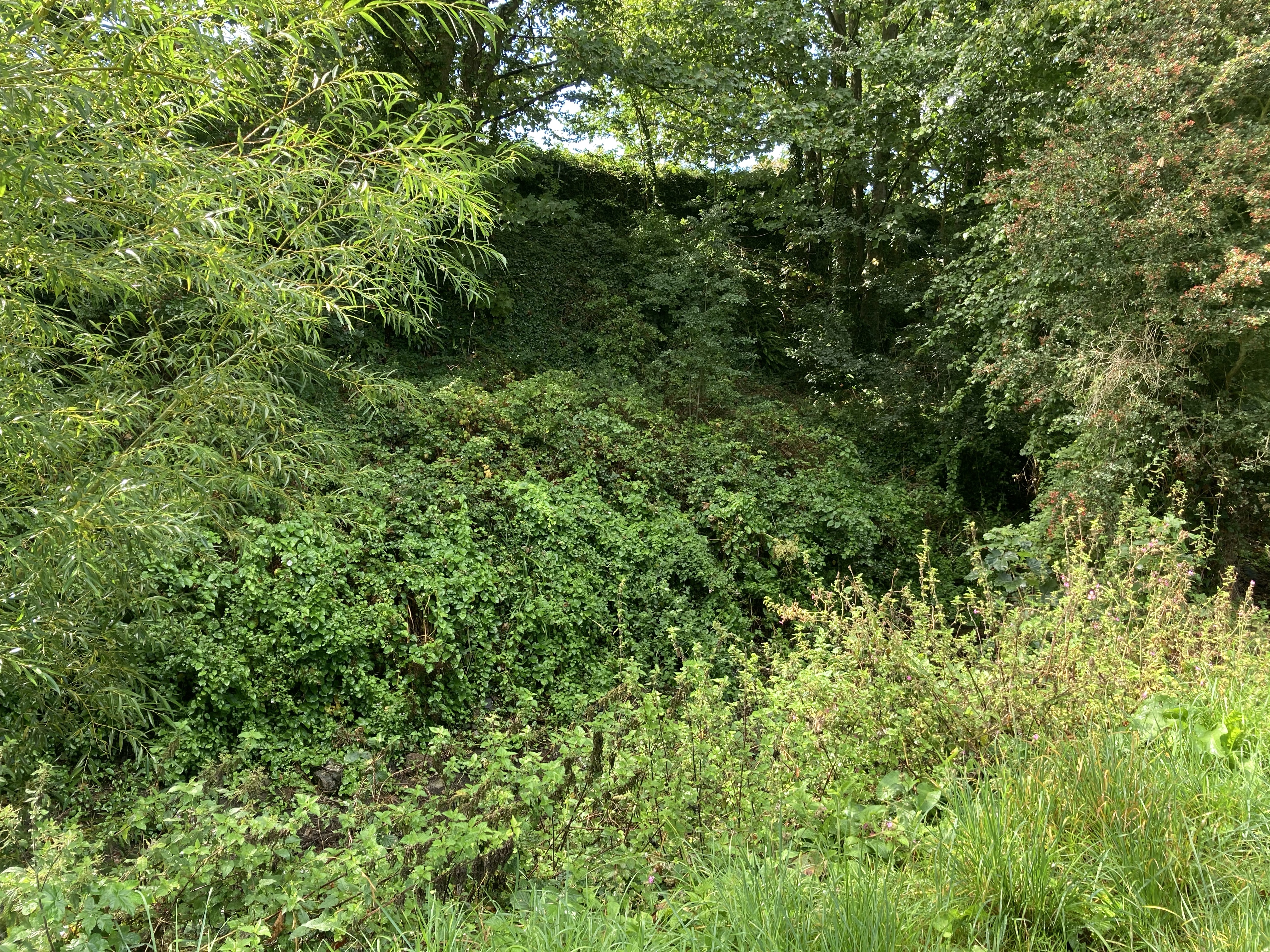 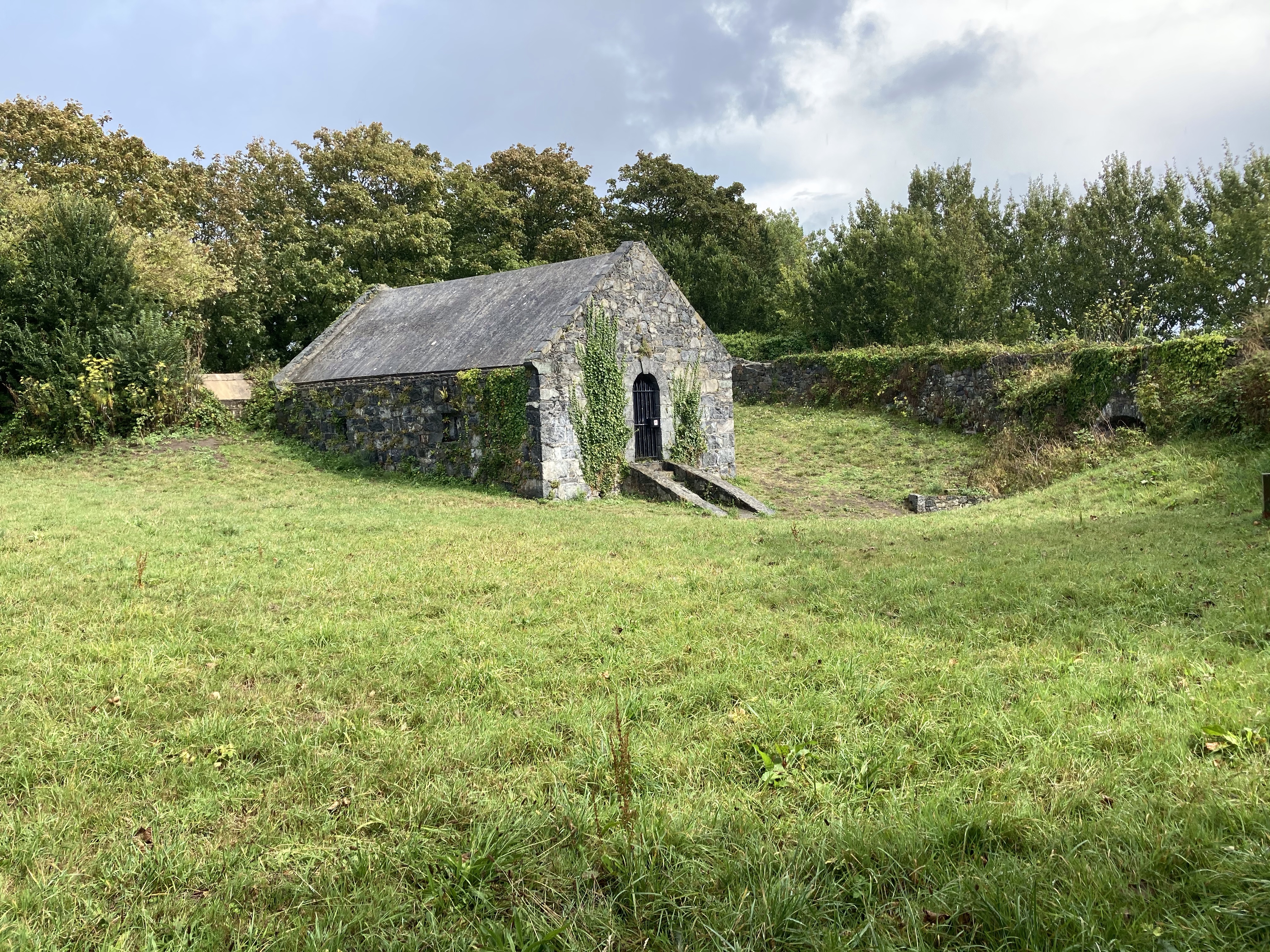 This was much more impressive than I was expecting, given that it was tucked away behind and between housing estates, on what had previously been sea-fed marshland, all now clearly drained centuries past. It was a huge area, with an outer moat and stone wall, a large grassy area, then another moat and stone wall leading to the inner sanctum. Look at the height of those ramparts over the moat! I shouldn’t beef this up too much as there are no other ancient remains. However, in its heyday it would have been a beacon standing out in its marshy hallows and it would have been very effective as a defence. The passage of time has taken its toll.

The notice-board did inform me that there had been a castle or defensive fort on this parcel of land for at least 800 years. The outer wall and moat had been built during the Napoleonic wars, when they feared invasion. Even in WWII they built a concrete command bunker on the main footprint of the original castle, which can clearly be seen.

The grassland, not visible in the photos above, or the old ‘Bailey’ is full of flowers and is almost like a nature reserve, and butterflies and dragonflies were plentiful. It is little oasis away from the hustle, bustle and noise of the town, especially the cars. The sun came out and so did the locals with their lunch packs.

From here, I walked down to the sea front and sat on the sea wall admiring the view and getting a wet bottom from stupidly sitting in a puddle. I had to walk for a good mile along the prom knowing that all the cars passing by me would be aware of my predicament, but finally I dried off. This could almost be Castletown Bay couldn’t it? It is called Belle Greve Bay, meaning ‘beautiful shore’. 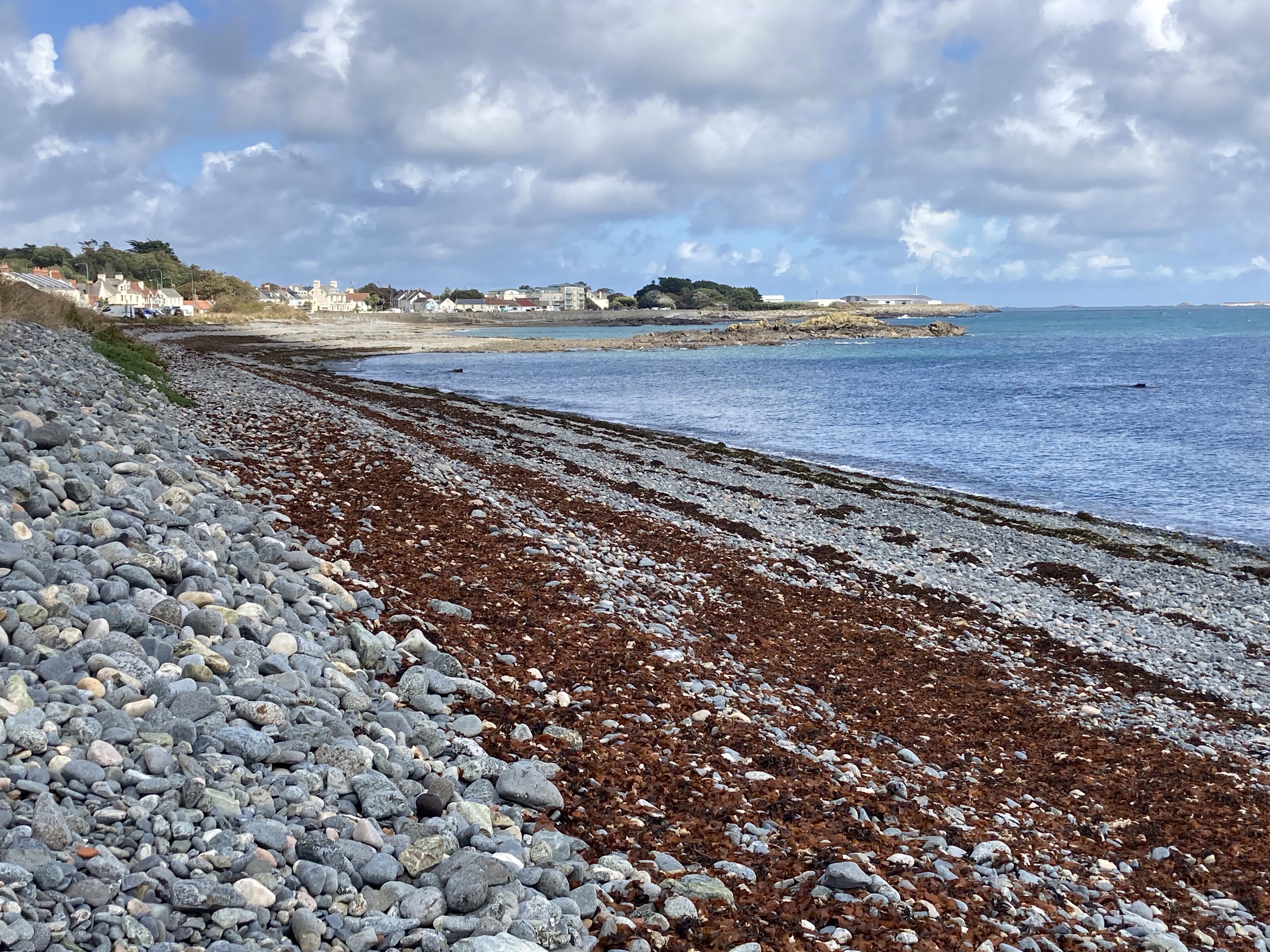 I had rung Hauteville House and was fortunate to be able to be included in the 4pm tour of Victor Hugo’s house in exile. I had a bit of time to kill, so I found the location and walked to the top of the hill, where there was a bench with fine views across the bay to Helm and Sark, and wrote my postcards.

Hauteville House is not to be missed. You cannot just turn up, you have to book and they are almost at the end of the season now. It is a masterpiece of ingenuity. What a character Hugo must have been, a philanthropist, an artist, a collector, a recycler, a philosopher, never mind his literary credits. I am not so sure he was as successful in his relationships – probably too independent-minded for that. It is an inspiring and intriguing house, never settling for the mundane. He was already wealthy before his exile and he clearly had one of those minds that doesn’t switch off, always looking for the next project. I bought a copy of ‘Les Contemplations’ and have already started re-reading some of his evocative poems (in French) – it’s always best to read poetry in its native tongue if you can.

I didn’t take any photos other than the views from his balcony and his garden, but you access photos and more history at www.museums.gov.gg/Hauteville 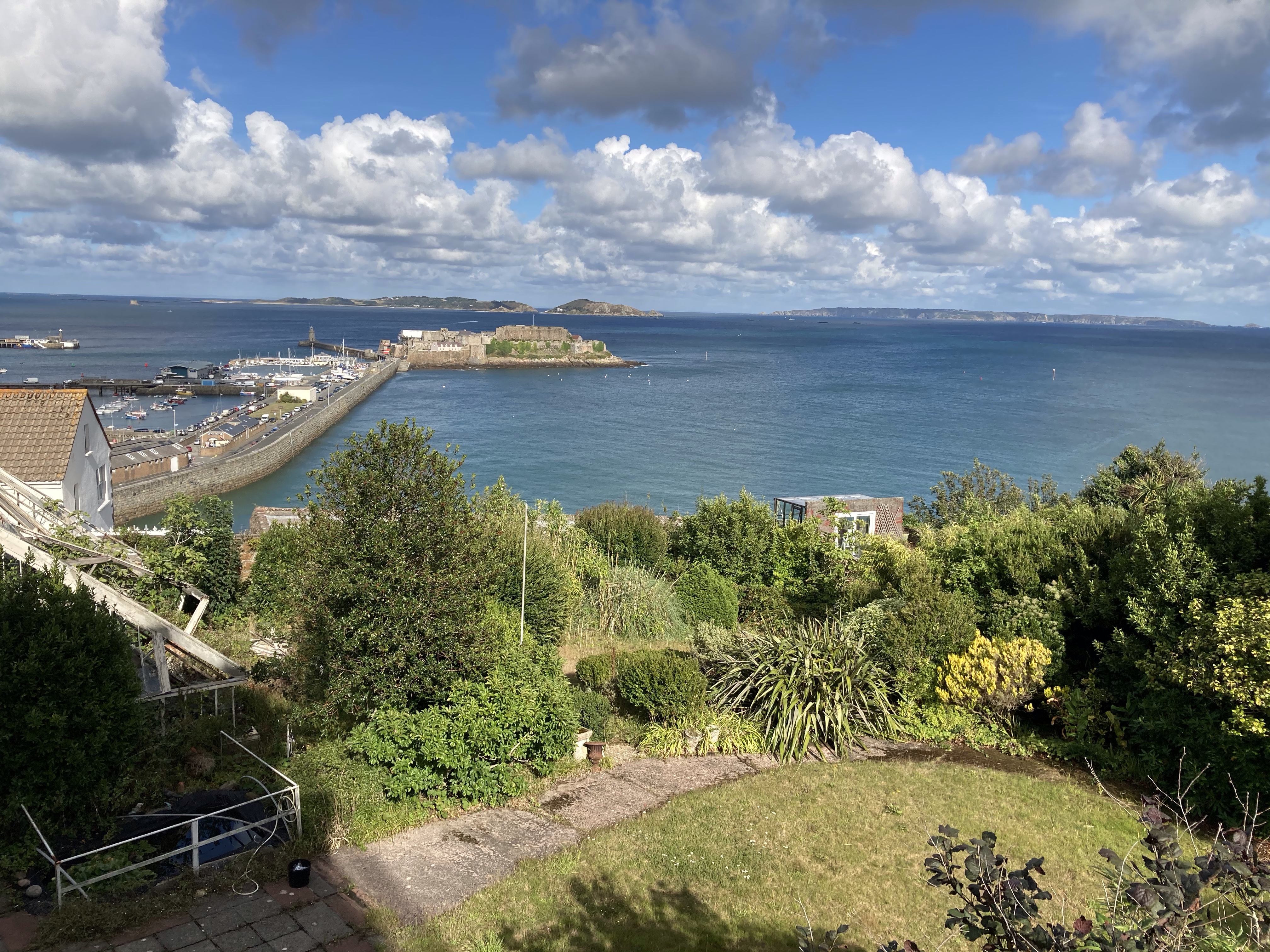 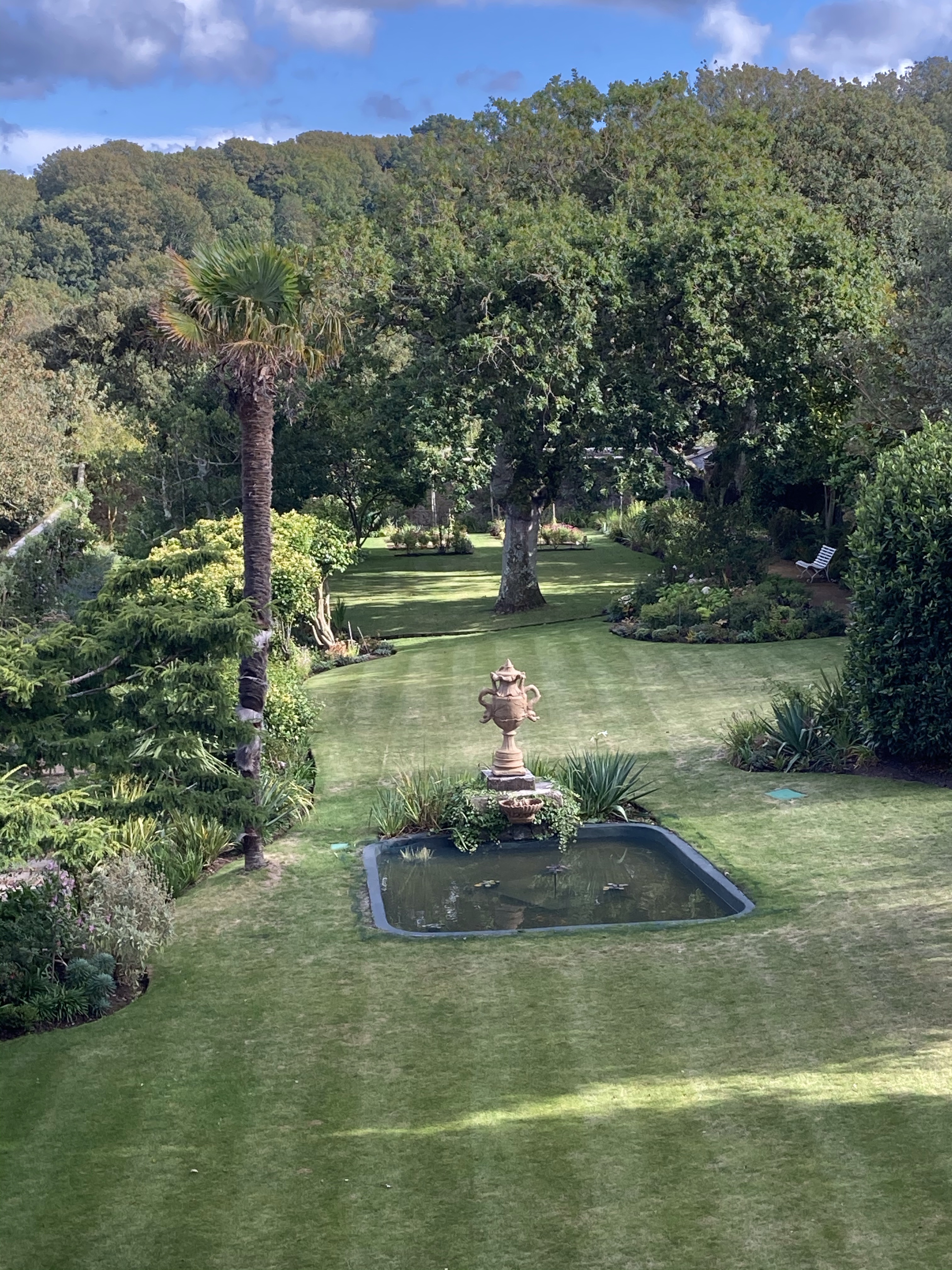 And there my day ended as it had begun with the 40 min bus ride to the hotel, but this time the rain had ceased and it was a very pleasant evening.

Considering this wasn’t a walking day, I still walked nearly 10 miles. Tomorrow I am walking more of the coastline westwards from the hotel, which I am really looking forward to.