With only a morning left, I had my last opportunity to visit any local attractions, and as Little Chapel was less than two miles from my hotel at La Villette, this seemed the perfect choice for my final walk.

The interior of the island is much quieter than the main thoroughfares and Guernsey has many publicised ‘Routes Tranquilles‘, the equivalent of our Green Roads. I was able to make use of many of these, which I imagine were farm roads in years gone by.

You will recall that the island claims to have no hills. Of course, it is not entirely flat, and inland it has a regular pattern of small hills cut through by attractive streamlets. I walked 7 miles inland this morning, and even then I managed to climb over 809 ft, so you can see this is a surprisingly undulating island. The highest point on Guernsey appears to be Hautnez at 111 metres, which is near the airport. Many of the cliffs are of similar height.

But today was pure countryside and brown and white Guernsey cows, and tiny villages with magnificent buildings.

The Little Chapel is very beautiful. I was expecting just one area for worship but there were a number of small chapels, all equally beautifully adorned. Creating it must have been a real labour of love and I could imagine using it for personal worship. Somehow it doesn’t feel as if it ought to be a tourist attraction. 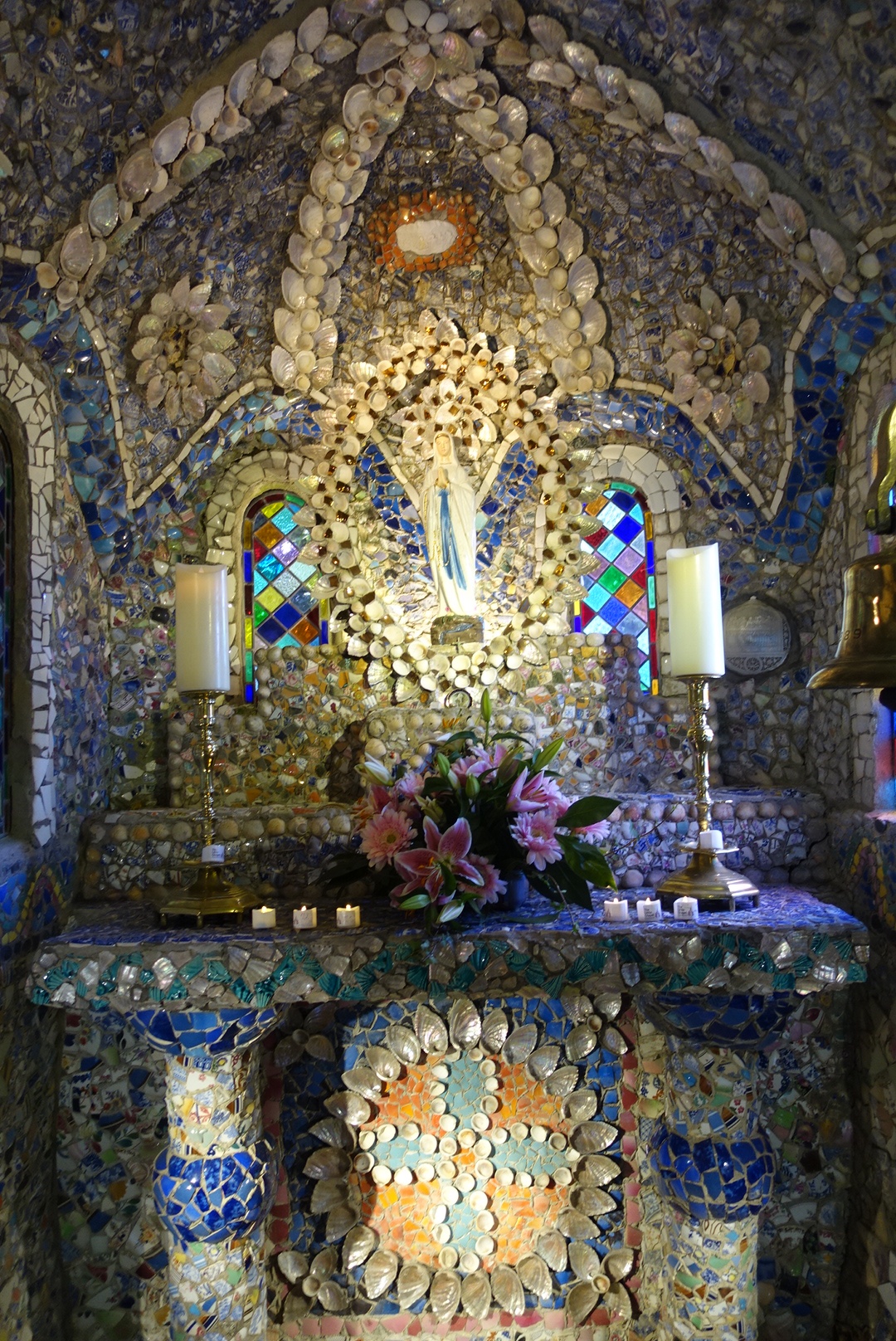 Having visited the chapel I went to the village of Les Vauxbelets and followed the route tranquille up to the Candie Road. I turned left as I had spied a walking path through woodland that interested me at Les Fauxquets. This was a pleasant walk, though the end of the path was unfortunately very muddy, making a mess of my new shoes. 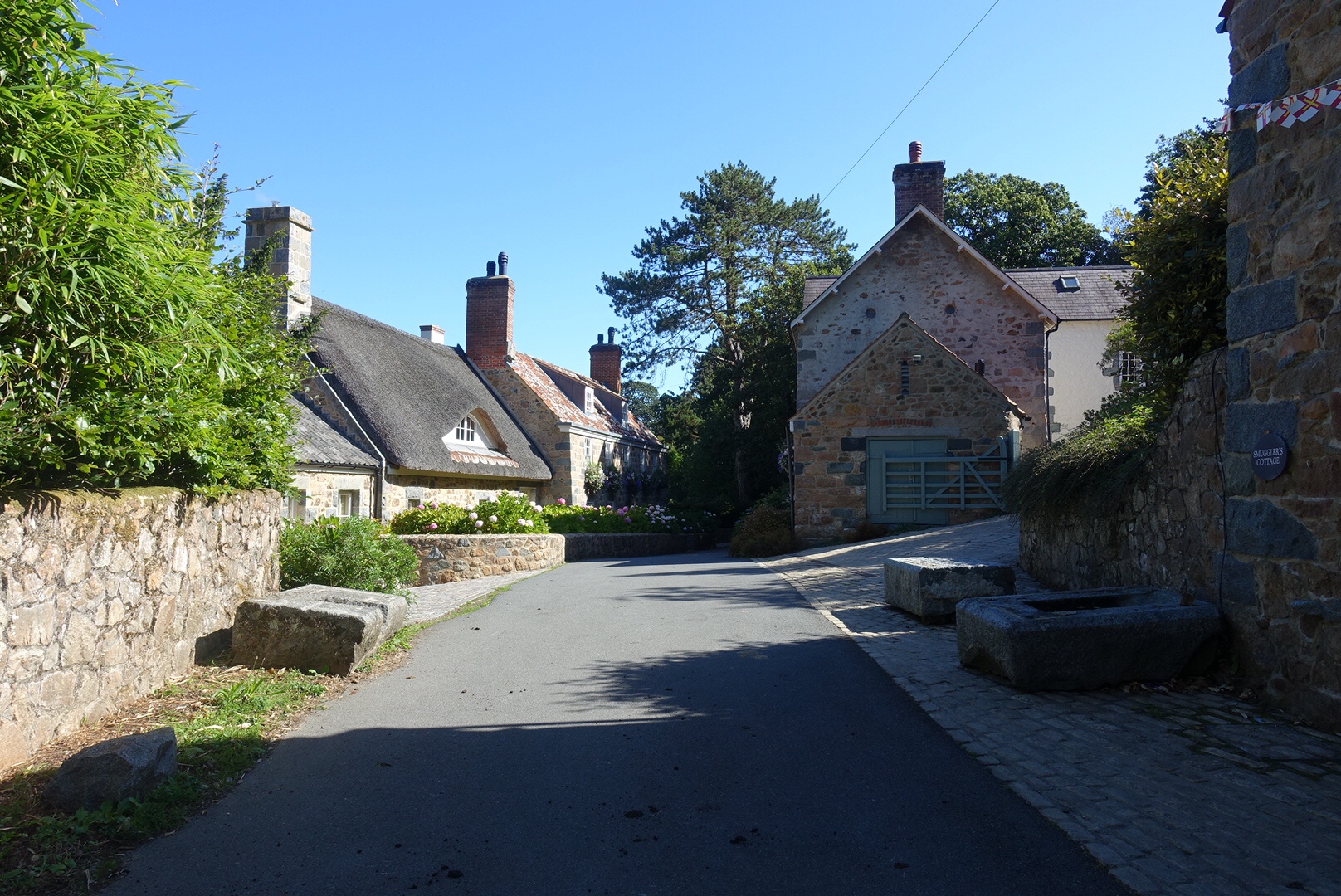 I followed the Route des Talbots with the Talbot Valley on the right. It is very picturesque with some beautiful houses. I then took side routes, that lead to St Andrew church. From this point I followed more routes that were ‘tranquilles’ but unremarkable and I was soon back at Mouilpied, the small village close to La Villette. I was back in time for a lunchtime pint in the bar, and later on a cream tea to keep me going until I arrive back on the Isle of Man.

So what have I gleaned of Guernsey these last few days?

1) it has far too many people and cars

2) the coastline to the south and south east is magnificent walking country.

3) their number plates contain only numbers, usually 5 digits but I saw one today with only 4

4) they have a good bus service, but narrow lanes therefore all journeys are slow, and if you happen to be behind pedestrians or cyclists, very slow

7) the footpaths are good but many do not contain waymarker signs. The scaled map is very good.

8) their post boxes are blue and set into walls.

9) many of the villages have their own ‘abreveur’, pumps which provided water for the local villagers

10) although the village names and places look and sound as if they are french, the pronunciation is different, more anglicised

12) it is inundated with reminders of its war time histories

13) I didn’t pass a single shop on any of my walks, except beach cafes and, naturally, in the metropolis that is St Peter Port

14) if walking the coastline, be prepared for hundreds of steps! END_OF_DOCUMENT_TOKEN_TO_BE_REPLACED