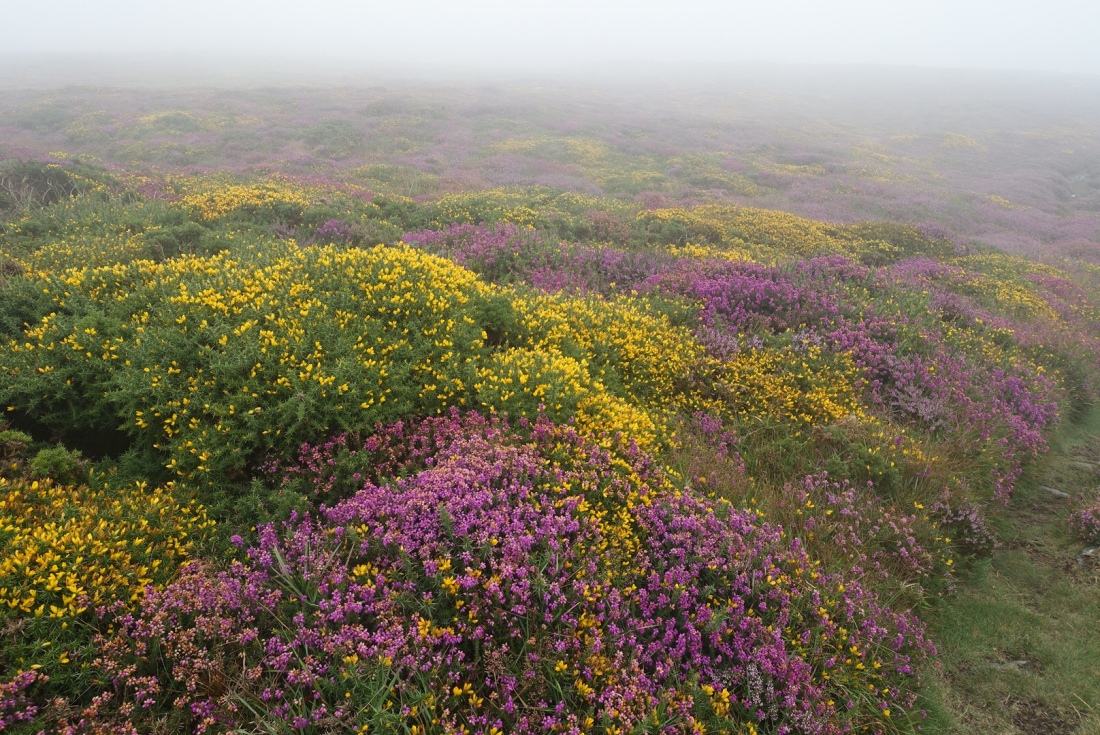 I make no apologies for there being a surfeit of photos mostly of purple heather and yellow gorse, as this was today’s mission. The Isle of Man boasts a kaleidoscope of spectacular colours at this time of year but you will see none better than on the walk from Cronk Ny Array Laa to Port Erin. I can see many of these from my house and can watch the terrain change from green to purple and yellow from my bedroom window.

However, it was one of those days starting in sunshine, quickly fading into soft clouds. Then the clouds would part, leaving you tantalised by a glimmer of sunshine, only to have it taken away just as quickly and be replaced by the thick veils of Mananan’s cloak, meaning that a large part of this walk was undertaken in fog, not great for photos. As you watch the slideshow below, it does eventually brighten up and offer up some views. 🙂

I had grabbed a lift to my starting point with my friend Janet, who was travelling to Peel to do her stint at the Wildlife Trust shop. She dropped me on the corner in thick fog. Undaunted, I made my way to the top of Cronk Ny Array Laa. I wondered if I might be a little late in the season for my photographs as a lot of the heather on the eastern side of the hill was going over from what I could see.

From here, it is a steady descent to The Slock. There are usually fine views of the south, but given the weather, imagination was necessary. I hadn’t gone far when I met a lady carrying a very large rucksack up the hill. It turns out she is Portuguese and was hiking around the island. We had a very interesting half an hour talking about her journey, bus times and tide timetables before we each continued on our respective ways.

Just before The Slock, I found myself below the cloud line and I was able to enjoy the magnificent colours all around me. It was then a short climb up to Gob Ny Beinn. The cairn is slightly further along the ridge. I stopped here for a late late lunch in the… fog… before continuing down to Fleshwick. This is usually the most stunning section for colour but the mist had the better of it for most of the walk. Even so, it was beautiful and moody and so very quiet. All I could hear was the wind under my ear muffs. Yes, it is August, but it was cold enough to wear a t-shirt, thin jumper, light fleece and waterproof at times!

Mission accomplished and numerous photos in the bag, once at Fleshwick I debated with myself whether to bother with the climb up Bradda Hill. I wasn’t feeling great and I knew really my body had had enough, but if I am presented with a challenge that is achievable I am likely to do it. There was an alternative, low route home from Fleshwick, but it is less interesting, so the more challenging route won.

The route up to Bradda Hill is known as a fairly ferocious climb, though not difficult as long as you take your time. It is 500-600ft, but it is only the first 450ft that is quite steep. And there are plenty of stopping places. It is then an undulating walk along the cliffs to Port Erin. The scenery changes a lot. There are still significant patches of heather and gorse but not the unbroken expanses of the Carnanes or Cronk any Array Laa. It is easier to see the effect of farming too, as where there might be moorland is grassland. At this point, the clouds decided to relieve themselves of their moisture, so I packed away my phone and stepped out to make my way home.

It was a most enjoyable afternoon, but it took its toll on me. I had to go to bed and rest when I got in, and I haven’t been a lot better today. But ask me anytime, I’ll just keep going until I no longer can.

I will leave the photos to do the rest of the talking. If you can get out in the next few days you won’t be disappointed. The hills all around the island look spectacular.