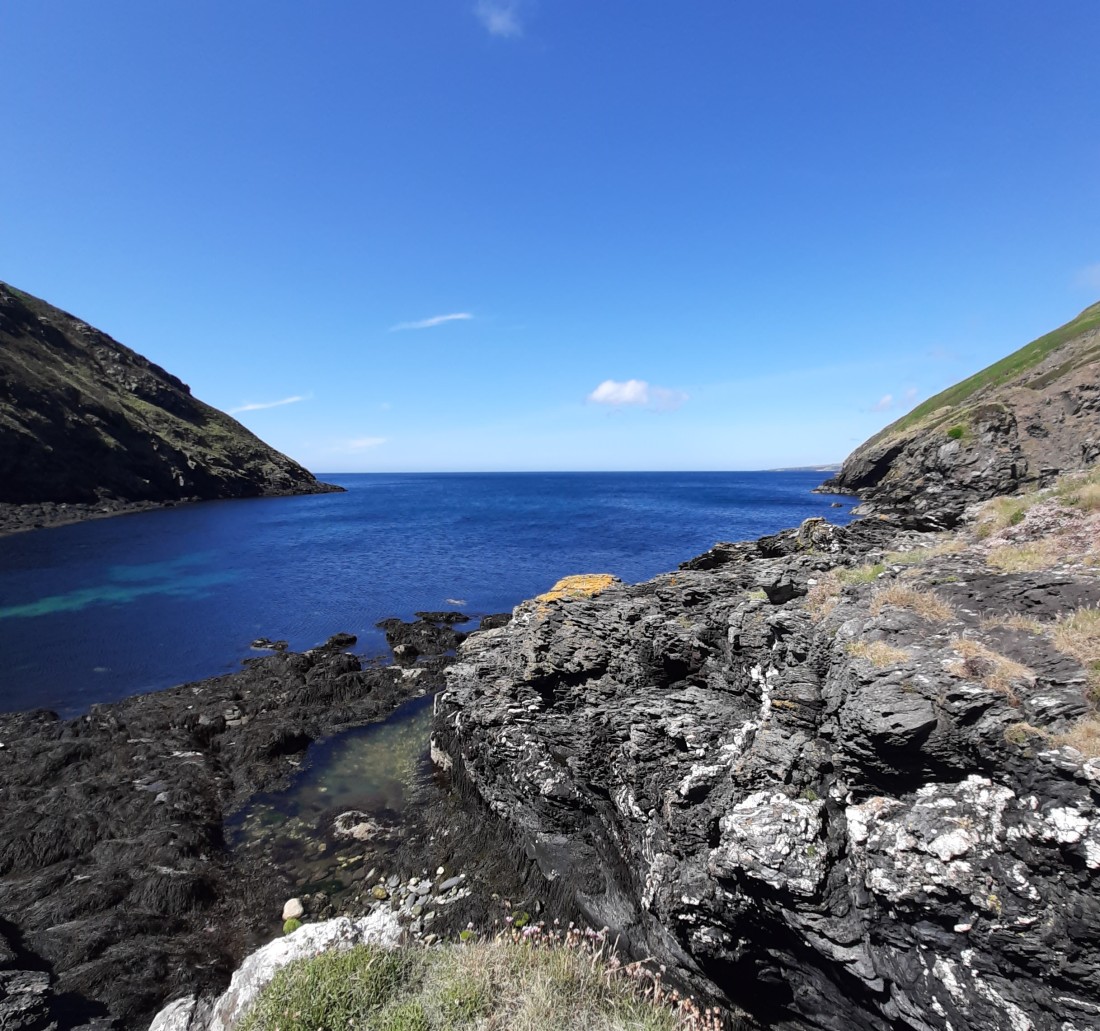 This relatively short walk – just under 6 miles from home – begins in very easy fashion. There is no short cut to walking along the edge of Port Erin. On reaching the golf course and the outskirts of Ballafession I took a path that is less used, maybe as it goes through someone’s garden, round the back of this hamlet. This takes you to an ancient monument, persistently visible from the road, but one that doesn’t require a second look very often. Today, it was sporting an Isle of Man flag, quite why I don’t know, but perhaps representing our pride in achieving Covid-19 free status, at least temporarily if not permanently.

It was at this point that I met up with some old friends – cows. What is it that cows find so fascinating about me? I am turning into a ‘cow whisperer’ in that I speak and they obey, but only until I turn my back. It was like playing ‘What’s the Time, Mr Wolf”!

Anyway, I digress. I did not actually go atop the mound, called Cronk Howe Mooar, which looks to all intents and purposes as if it was built by a large dog doing a very big bone scrape. On first excavation in 1812 it was thought to be a natural vestige of the ice age as it contains layers of rocks in a similar sequence to those found in the north. In fact, it is now considered that it is 900 man-made remnant of an ancient fort. Although difficult to see, there is a 10 metre ditch surrounding the motte and bailey castle.

I left the cows and walked both beside and in the stream which leads to the Honna Road (not the best path I have ever seen), then walked up Mill Road to join the pleasant walk down to Fleshwick Bay. This was about 2.5 miles by this stage. Fleshwick Bay is so pretty and unspoilt. It lies in a steep sided valley between Bradda Hill and the Carnanes, so whichever way you go thereafter, it will be uphill, and steep uphill. Before that, I clambered over the rocks and found myself a quiet place to have my picnic and watch a dog swimming in the water as its owner threw pebbles for it to chase.

I was walking back to Port Erin and I had a choice of a walk contouring around the east side of Bradda Hill, or taking the climb and walking along the coast. You can guess which one I opted for.

I am used to this climb, but even so I tend to pause several times on the way up. It is steep, there is no doubt about it. You go from sea level to 200 metres in half a kilometre, with the bulk of it in one section. It is a good soil path and in some ways it is easier to go up than down it, especially if is has been raining.

What views you get from the top! Initially, you can see all the way to Niarbyl and Peel in the north- west then as you continue along the coast path the Calf and Port Erin in the south become visible and Castletown and Langness in the east.

I was walking along the fields before the climb up to Bradda Head where I met a young couple walking from Port Erin to Peel. At the time it didn’t particularly occur to me that it was quite late in the day to be only at this point. They would still have at least another 10 miles to go, including some steep uphills. They wanted to reach Niarbyl by 5pm when the cafe would close, and I thought that if they were good walkers and with a favourable wind they might just make it. As I continued my walk, I began to have doubts and I became quite worried about them. They didn’t seem particularly well equipped and they were already saying when I met them that they needed a drink. A sole walker caught up with me when I was on Bradda Hill and we both agreed that they wouldn’t make it to Niarbyl in time, especially as he informed me the cafe had closed at 3pm, not 5pm as they had believed. This lone walker had taken 3.5 hrs from Niarbyl to Bradda Hill and he was no slouch, he had been walking at a good pace and he seemed quite fit. I decided there and then that I would get home, which would take me about an hour, pick up the car and see if I could find them, and take them to their destination.

I enjoyed my brisk walk across Bradda Hill and Bradda Head, taking the route by Bradda Glen, then the quickest path along the promenade and back home. Going through my head was that if I didn’t find them, the chances of the bus running from Dalby was zilch and they would have no choice but to walk the full distance. The beautiful sunny weather was also just beginning to turn.

I dropped off my rucksack and picked up a couple of bottles of water and sped off in my car. The only sensible place I might see them would be on Cronk Ny Arrey Laa by this time. I did check as I went around the Sloc and there was no-one walking there. The only problem was that if they had gone the right way, then they wouldn’t come down to the bend in the road and I would miss them. But at least I would have tried. It was rather cool and breezy when I arrived there. It had been breezy all day but the weather was beginning to deteriorate. I looked up to the summit of Cronk Ny Arrey Laa and I could see a couple walking down towards the car. I couldn’t tell if they were my couple but I could ask whoever it was if they had seen them. And then they were down, and yes, it was them. Would you believe that, and I had only been waiting 5 minutes. They had missed the coast path that would take them to Eary Cushlin. The lady was really pleased to see me, she had had enough of hill climbs, but the man would have liked to continue. Realistically, he didn’t know where he was going or how long it would take them so it wouldn’t have been a good idea to continue. I didn’t give them much choice, and I bundled them in the car, gave them some water and took them to Peel where they were going to get a meal at the Creek.

When I got home, I temporarily had doubts as to whether I should have interfered, but then checked the timetable, and they would have missed the last bus, so they would have ended up tired, cold, miserable and very hungry had they had to walk the full distance. They reminded of a time when I was walking the South West Coast Path with one of my sons, and we came across a man who was completely dehydrated and had collapsed and passed out. His girlfriend had somehow managed to prop him up under a bench so that he wouldn’t roll down the hill (!) while she went to get help, but he was just left there on his own. We stayed with him until he came round, and even then he wouldn’t take our dehydration tablets. Strange what you remember isn’t it, but I think this was in the back of mind when I decided to help this couple.

We had a good chat in the car, and I have heard from them since and they would like to meet up for a walk in the south sometime, and the young lady would like me to teach her Psychology!! 🙂

Best of the rest: