I had an hour to spare before Evensong at Peel Cathedral, just long enough for a brisk walk around Peel Hill and Peel Castle. I parked down by the marina and followed the road over the bridge, where there is a path that takes you up the hill. This gives extensive views of the coast to the north and Peel itself.

There is a variety of footpaths around Peel Hill, and you can choose the best one to take account of weather conditions. If you go all the way round Peel Hill I think it’s about 3 miles, but you can shorten it quite easily, as I did today. Peel residents are so lucky to have this walk on their doorstep, as well as the curved sandy bay and beaches. The cliffs to the north are low and easy to walk, so you can choose your walk according to your mood as well as the weather.

Having reached the first level area on the hill, I followed the track that goes around the back of Peel Hill, which is an even path until you reach the old quarry. There is then a narrow footpath that takes you uphill and around the coast, but you needn’t worry, it doesn’t go anywhere near the edge. This finally reaches the coast path on another col between the hills. You can turn right, or go up to the next peak to Corrins Folly, but I took the path over the tops on the left, where I eventually rejoined my original path. It is easy walking on grass, and there are a couple of short, steep downhills.

I still had some time to spare, so I did my usual sortie around the perimeter of the castle. I always have fond memories here as my son, grandchildren and I had a picnic up there on the rocks overlooking the bay – grandchildren I haven’t seen since November and unlikely to see in the foreseeable future 😦

From here, it was an amble on the front where an equestrian event was taking place on the beach. The prom was packed, as was the ice-cream shop. It is so good to see so many people out and about, including visitors from Guernsey.

If you are holidaying here, I can recommend the full walk around Peel Hill, or for those liking a longer walk, you could continue along the coast path to Glen Maye and get the bus back, or walk over the hills inland back to Peel, and have an afternoon tea at Harbour Lights.

Today I have been out on South Barrule measuring the peat, so the next post will have a completely different feel to it.

I had been to Peel Cathedral for Evensong. It was a very special evensong, with the very musical group Voces Insulae providing the choral repertoire. It was absolutely beautiful and the bible readings too stood out above the norm for some inexplicable reason. The cathedral was particularly resonant today.  I guess some days are like that.

Having started out as an inconveniently wet night and morning, it had now brightened up, so I strolled down to Peel beach where the wind had whipped up froth that looked like candyfloss. I then did the circuit of the exterior of Peel Castle, passed the spot on the point where my grandchildren, son and I had had a memorable picnic about this time last year. As I came round to Fenella Beach you could imagine St Patrick’s island cut off from Peel as great swathes of sand seem to almost continue seamlessly from one side of the harbour to the other. 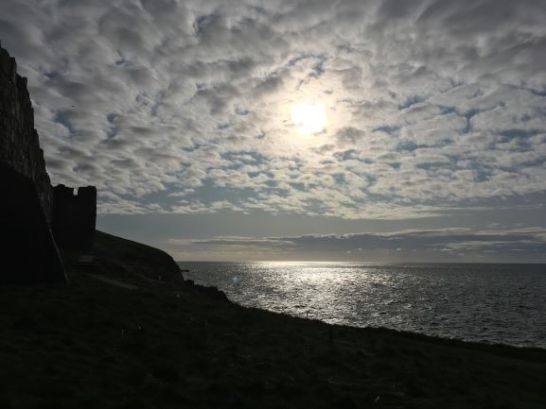 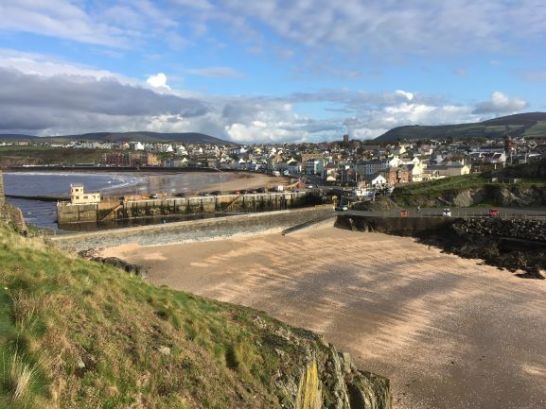 I then traversed the low route contouring around the east side of Peel Hill back to my car, intending to get home in good time to cook my tea before the ‘Strictly’ results show,. Peel look very colourful and appealing in the soft late afternoon light.

I just had to pop in to my favourite glen on the way back for a bit of magic. And I was not disappointed. As you can see the fairies had made their ring to dance around, though they hid in the undergrowth when I turned up.

I could hear the waterfall well before I could see it. It was spewing out copper and peat coloured water and although there was quite a torrent it was nothing like I had witnessed a month or two ago. 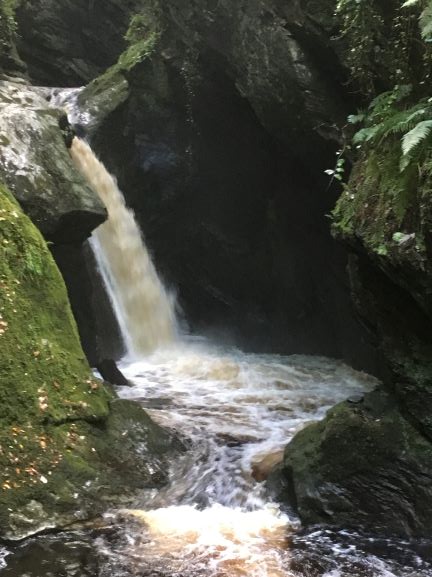 I managed to watch Strictly – no surprise as to who was sent home there then – then settled down to watch ‘Millionaire’ as well, when I decided to make some fruit cake to take out tomorrow on my first walk with the Island Walking Festival’s Weeks’ Walks, so I dodged out in the intervals and I now have a full stock of food to take with me tomorrow.

I shall be walking from Snaefell along the tops to Ramsey, and on Wednesday doing a circular route taking in Greeba Mountatin, before I leave the island for a little while to visit family and have a week’s holiday with HF in the Lake District. I will try and write a blog about each of these walks that I haven’t ever done before!