I was expecting great things and I wasn’t disappointed. BBC’s Julia Bradbury, in her recent programme on walks on the Isle of Man, had made me aware that I still had never visited Dhoon Glen. This was the perfect opportunity to make amends. I had been on my regular wildflower quest, this time at the Ayres with Simon Smart and 15 other windswept people, and I was on my way home travelling along the coast road towards Laxey when I noticed a sign for a picnic area beside the train entrance to Dhoon Glen.

This week has seen so much heavy rain on the Isle of Man I thought there was a good chance that the waterfall would have some substance to it, but of course I didn’t know whether to expect a fairly small drop or a broad waterfall, and I had no idea whether or not it was continuous for the full length of the valley or would peter out into nothing. Such is the joy of doing new unplanned walks.

This one is an extremely short walk of less than 3/4 mile from the electric train station to the sea, but you will both descend and ascend an impressive 485 feet in that short distance. It is a mostly unrelenting climb with several steep steps, but there are a couple of patches where the terrain is more even and level and there are lots of bridges to rest on and a few seats to perch on.

Entrance to the Glen 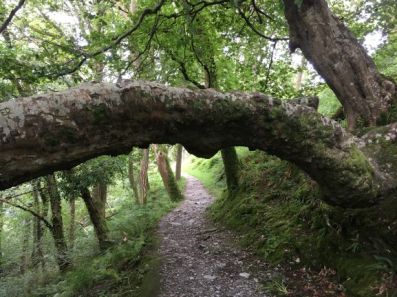 An even part of the footpath but remember to duck!

It didn’t start out as impressive. The entrance looks like any one of our numerous glens. This one was very muddy and potentially slippery in places and the ground was uneven. The stream is barely visible at the outset, but after only a few steps it begins to follow alongside the path. I had only walked a stone’s throw when the path went round a bend and into a tunnel under a bridge,  which was covered in concrete on one side with greenery growing over the top of it. It looked as if the tunnel contained at least two structures passing as former bridges and the concrete seemed to be keeping one side upright. Not promising, especially as the stream shortly went through a massive drain under another bridge. I was beginning to doubt Julia’s exuberant account of Dhoon Glen, but this would be to be short-sighted (which I am, as it happens!)

After this, I encountered a very large stone structure which had clearly housed some form of industry. There was no obvious place to take a photo of this, so you will just have to visit for yourself. It had a tall chimney and a space for a very large wheel, on a much grander scale than the one in Groudle Glen (which has now been entirely removed for renovation). The Dhoon Glen mine was only worked for a short time as it was not profitable and produced very little tin or lead.

Just around the bend from here, you start to hear and see water flowing fast and freely. The valley is extremely steep sided and it drops away very quickly. It provides tantalising glimpses of the waterfall through the trees and with each step I descended I felt I would be in for something special when I reached the base of the waterfall. And what a treat it was. The waterfall was gushing over a small but steep and deep amphitheatre and at the top it had divided itself into two, rather like hair falling down the side of a face. At the top, it struck some rocks, sending off explosive droplets of water in all directions. It was mesmorising. 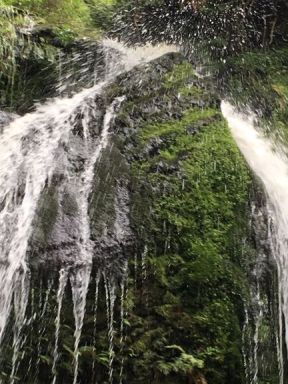 It continues in a series of small cascades  and the path dodges over well constructed bridges before the stream has its final fling off the rocks as it reaches the beach. 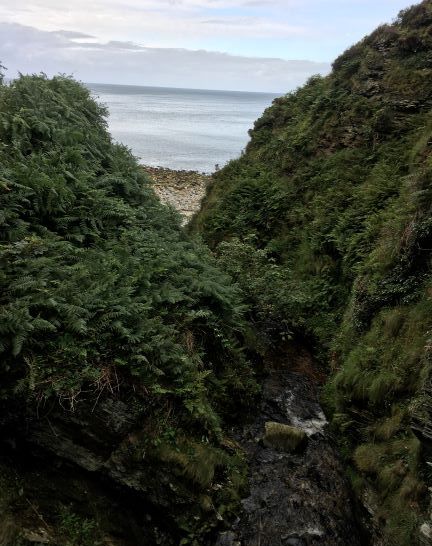 On the beach I was struck by the size of the slabs of rock forming the cliffs on the northern side. You could imagine them creating their own waterfall in torrential rain. There is an alternative path on the southern side of the Glen, but this would avoid the waterfall, so I took the same path up, watching a pair of grey wagtails hopping up and down the stream in front of me. As I reached the waterfall (called Big Girl) I stopped and stared to imprint the impression of the waterfall on my memory for ever.

We may moan about the weather, too hot, too cold, too windy, too wet, but it is this very variation that brings such moments of joy – and Dhoon Glen today was exactly that.